Feast Your Eyes On The 2021 Ford Mustang Mach 1 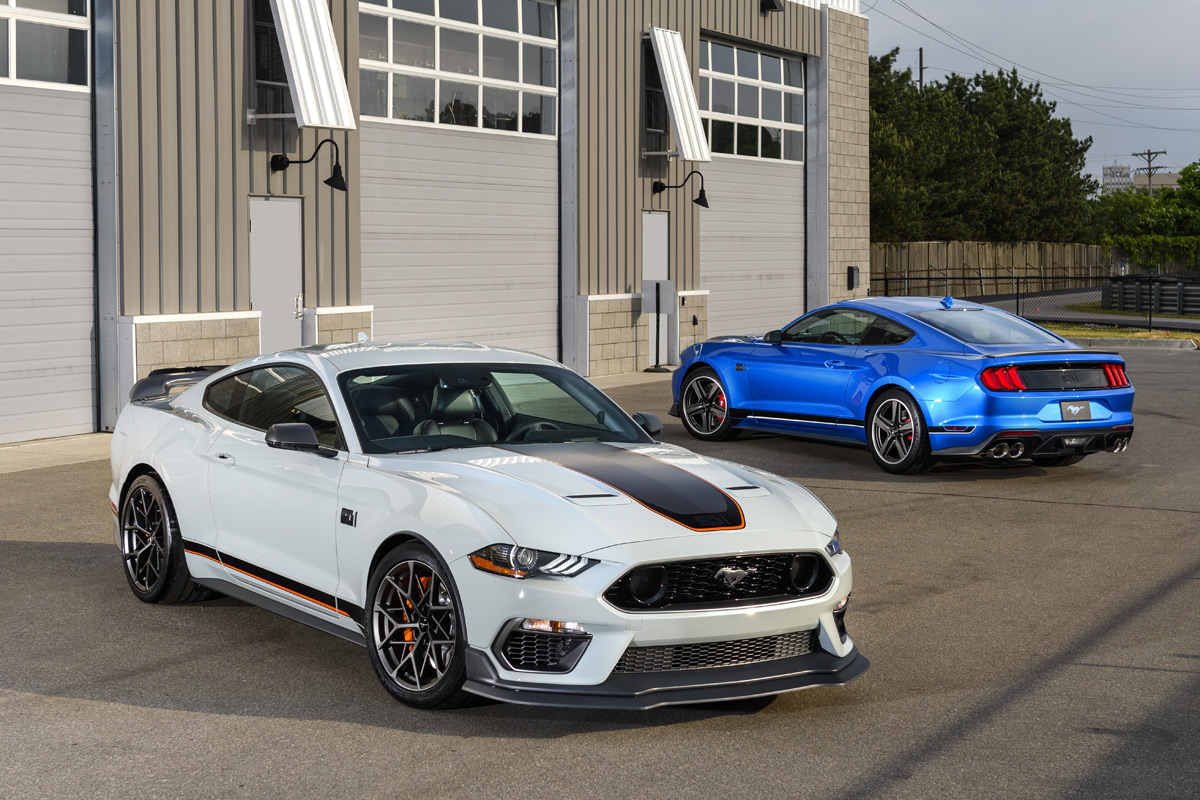 Since the current-gen Ford Mustang S550 was released back in 2015, they’ve continued to push the envelope, with a number of different performance variants, including the Mustang GT PP2, the Mustang Bullitt, and of course the track-ready Shelby GT350 and Shelby GT500. But those folks in Dearborn aren’t done just yet. After a 17-year hiatus, the iconic Mach 1 returns!

Today, Ford unveiled the limited-edition 2021 Ford Mustang Mach 1, replacing the Bullitt as the top model in the 5.0-liter V8 lineup, with 480 horsepower and 420 lb-ft of torque. Like the original, the all-new Mach 1 bridges the gap between the Mustang GT and the Shelby models, delivering V-8 power, unique functional aerodynamic enhancements, competition-capable suspension upgrades and a driver-focused cockpit. 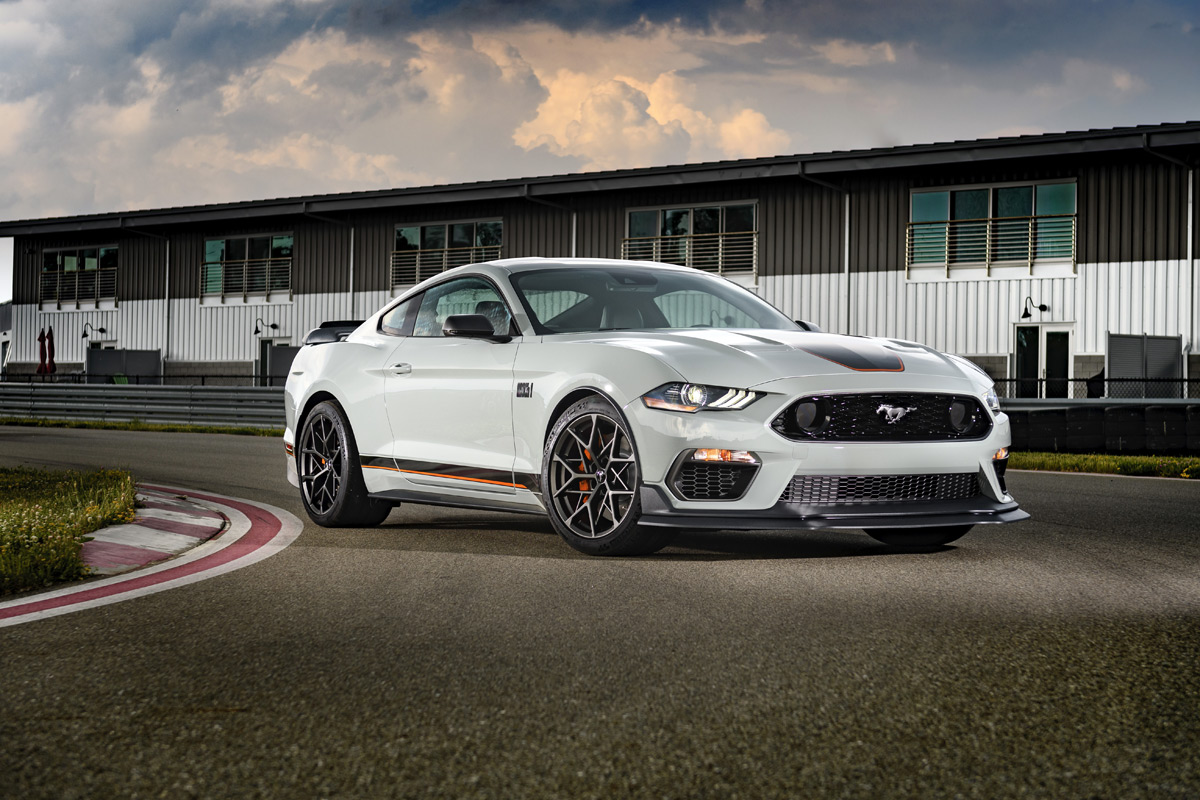 “Bold styling, great acceleration and speed – Mach 1 says it all,” said Jim Farley, Ford’s chief operating officer. “This is one of those special Mustangs that truly brings a smile to the faces of our owners, enthusiasts and fans – including me – so there’s never been a better time to bring back Mach 1 and have it go global too.”

Originally launched for the 1969 model year, the Mach 1 was named after Chuck Yeager’s feat of becoming the first to break the sound barrier (Mach 1), and the car went on to set 295 speed and endurance records in its first model year at the Bonneville Salt Flats. Is this 2021 Mustang Mach 1 destined for such greatness as well? 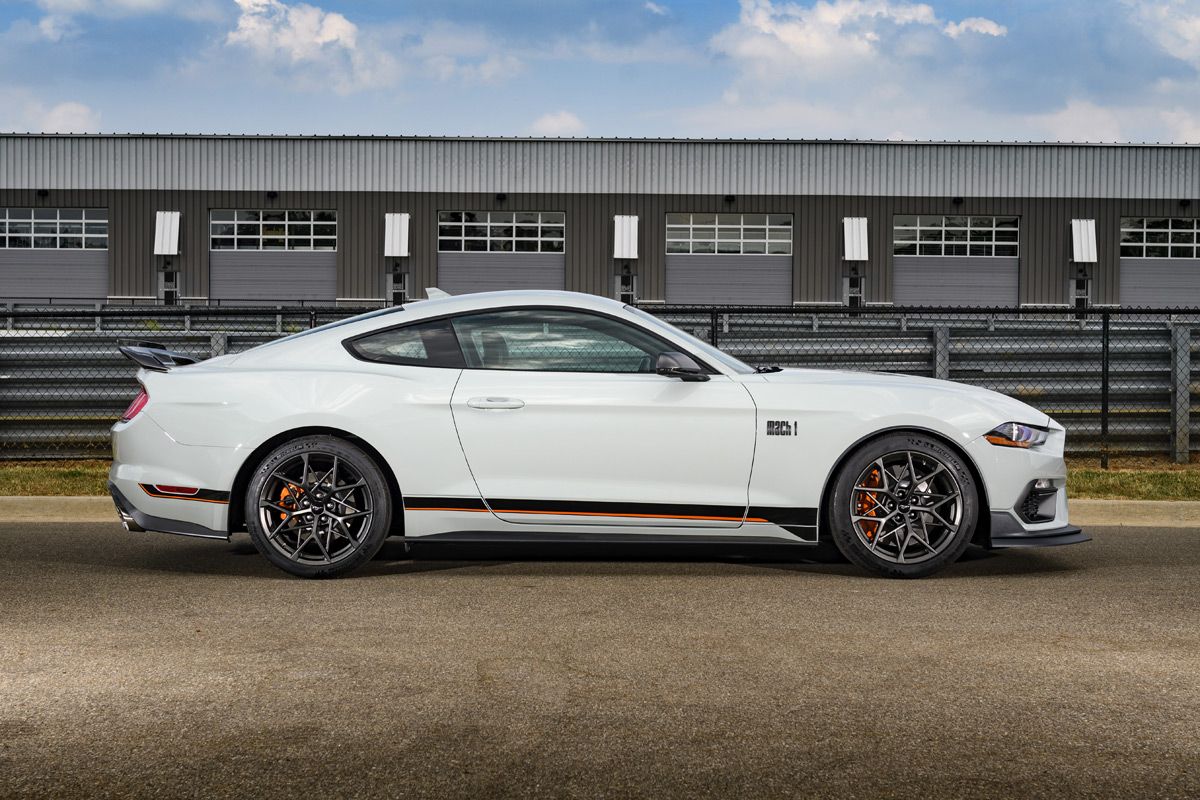 Hard to say, as today, the pony car wars are fiercer than ever. But what we do know is that the Mach 1 is set to become the most track-capable 5.0-liter Mustang ever, courtesy of a newly designed front end, plus Ford Performance parts from Mustang Shelby GT350 and Shelby GT500 models and an available Handling Package for greater at-limit handling.

Packing a specially calibrated 5.0-liter V8 engine that delivers 480 horsepower and 420 lb-ft of torque, it’s on par with the outgoing Bullitt Mustang.. but I was hoping for even more power. Integrated into the Mach 1 engine are revised Shelby GT350 components including the intake manifold, oil filter adapter & engine oil cooler, increasing engine oil cooling capability by 50%. 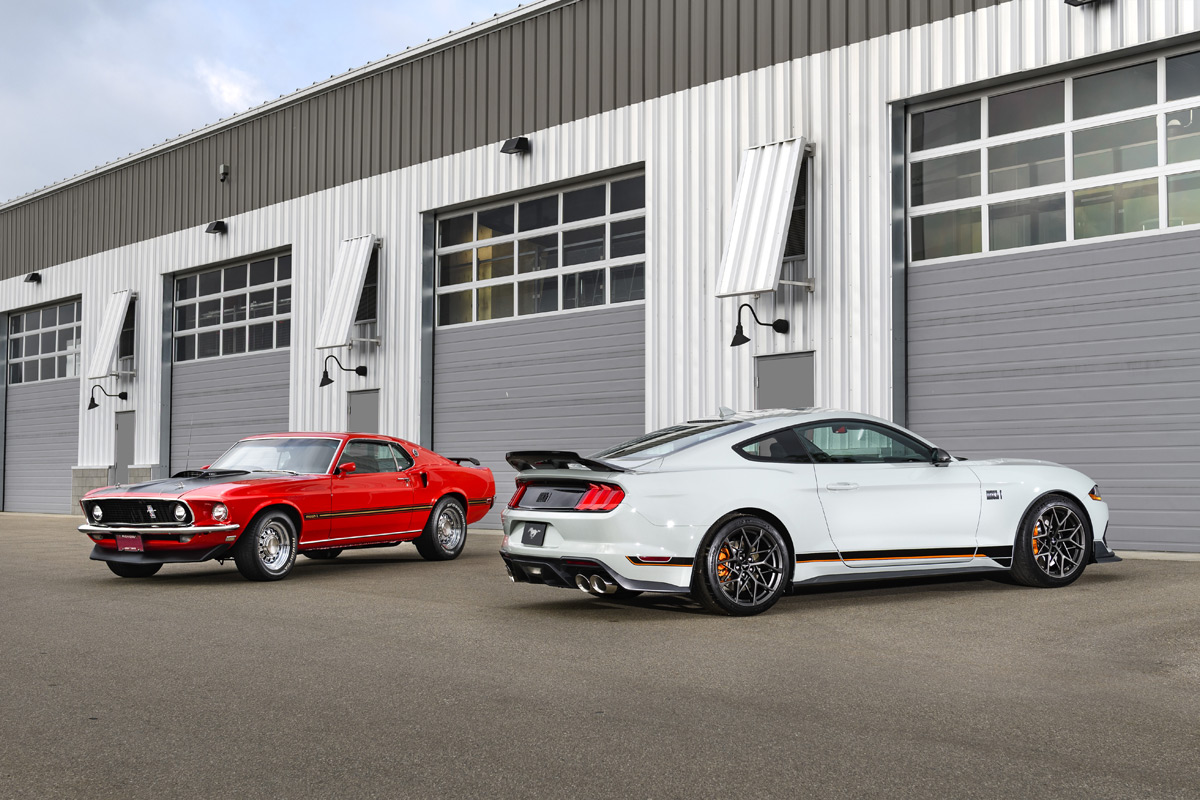 The all-new Mach 1 wears a uniquely crafted front end for aerodynamic efficiency and a host of Ford Performance parts that help celebrate its iconic heritage. Mach 1 comes standard with a Tremec 3160 6-speed manual transmission from the Shelby GT350. For the first time, Ford has outfitted the system with rev-matching and the transmission is paired with the GT350 oil cooler system and Mustang GT’s twin-disc clutch and short-throw shifter.

Drivers can also opt for a 10-speed automatic transmission with an upgraded torque converter and unique calibration that enables optimizing torque capability, shift character and overall enhanced performance. It’s not the route I’d go, but it should broaden the appeal, since the Mustang GT PP2, Bullitt, and GT350 were only offered in manuals. A second air-to-oil cooler increases cooling capacity by 75%. 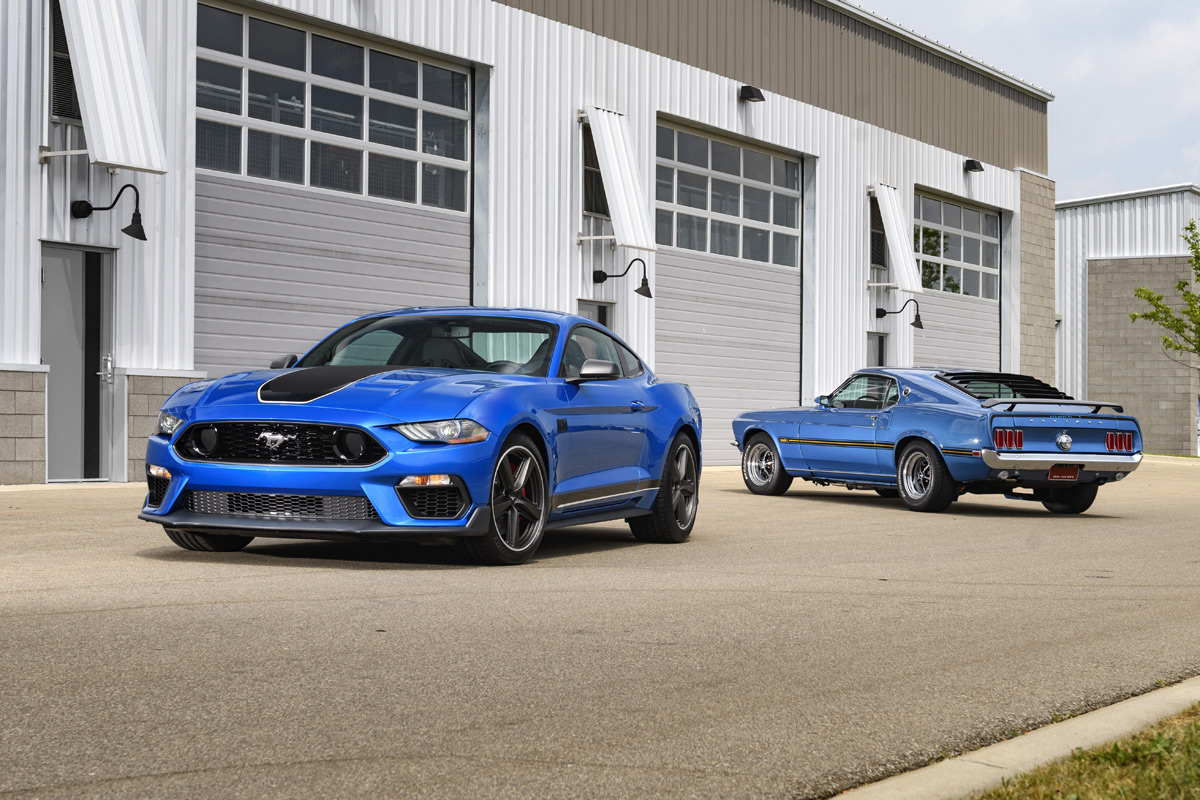 Looks wise, the Mach 1’s grille harkens back to the original with a deep 3-D mesh, shark-nosed section and faux lamp elements. Flanking the fascia are new side grilles below each turn signal lamp. A low-gloss Magnetic pony badge is centered on the grille. Low-gloss magnetic and black accents throughout the vehicle provide a premium look while staying true to Mach 1’s bold, muscular heritage, including low-gloss Magnetic mirror caps and rear spoiler. 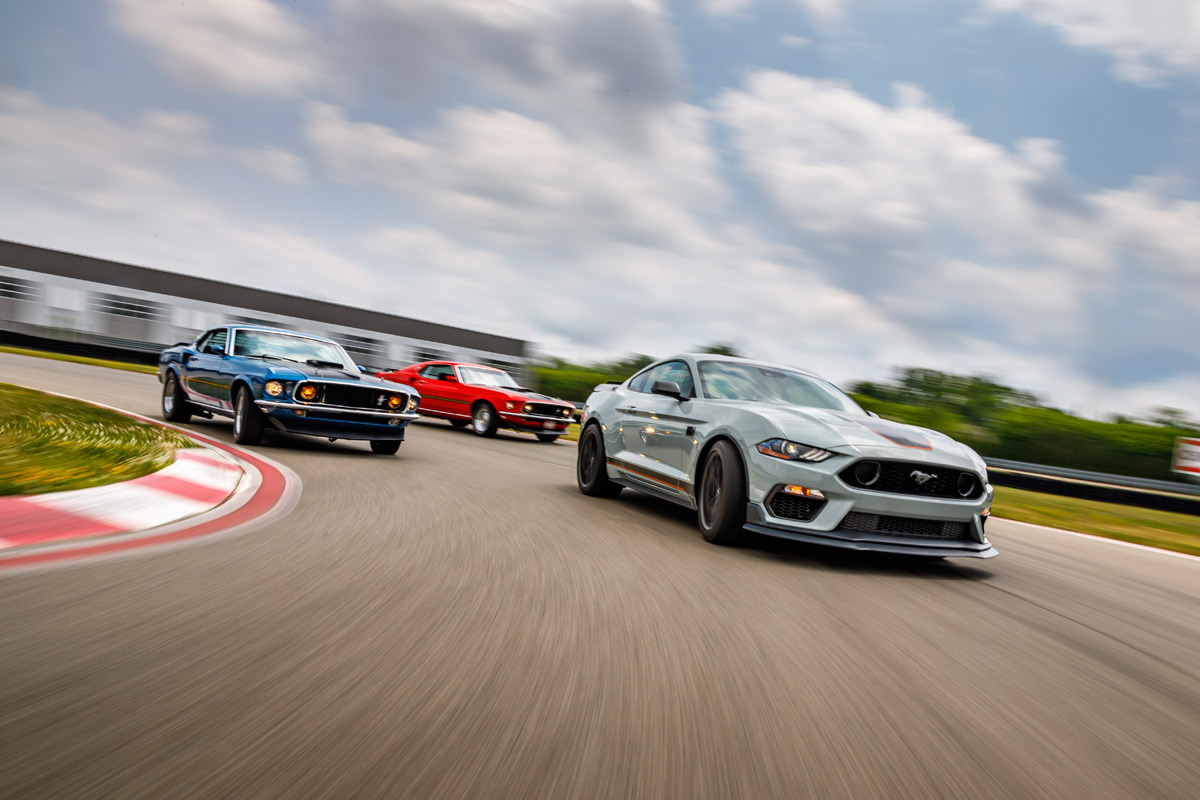 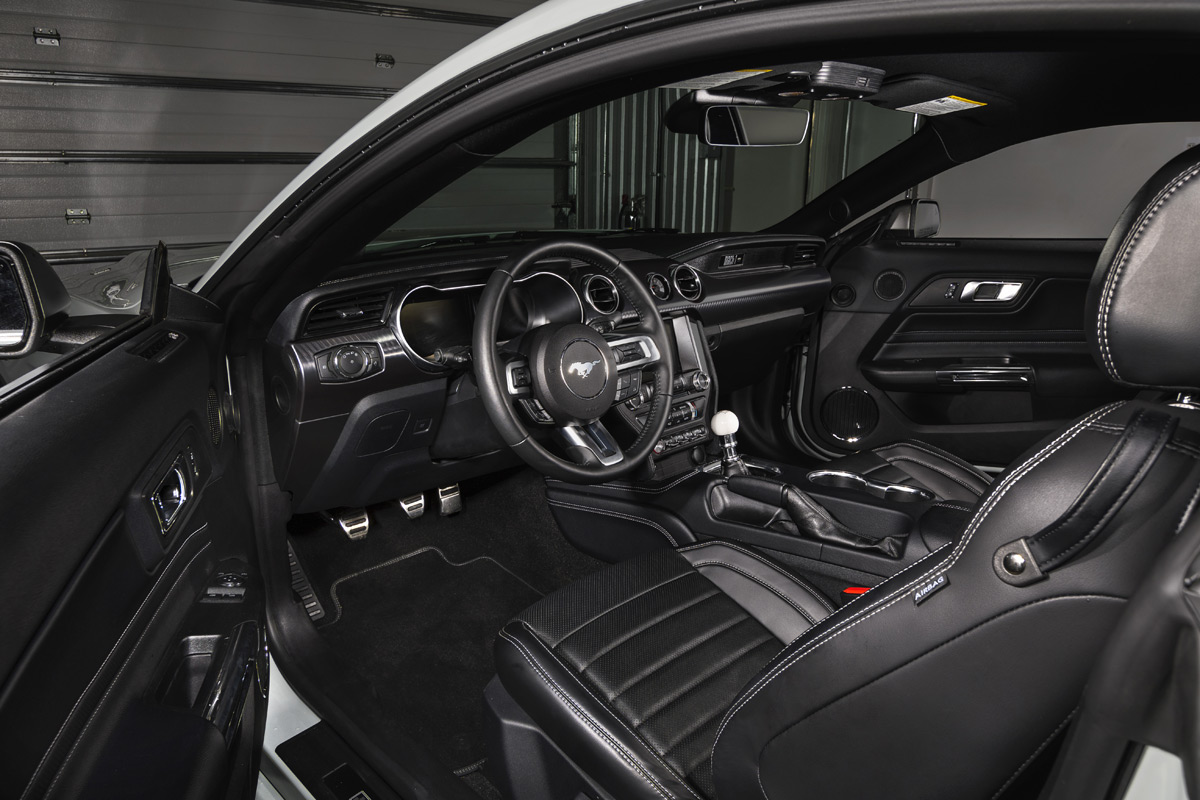 Functionally, the Mach 1 engineering and design teams worked in tandem to develop a front end unique to the Mach 1 persona that also meets the high aerodynamic demands of the engine, transmission and braking systems. A new two-piece upper grille, lower grille and valance, and new side grilles, all contribute to Mach 1’s signature look and more demanding aero and cooling performance requirements. 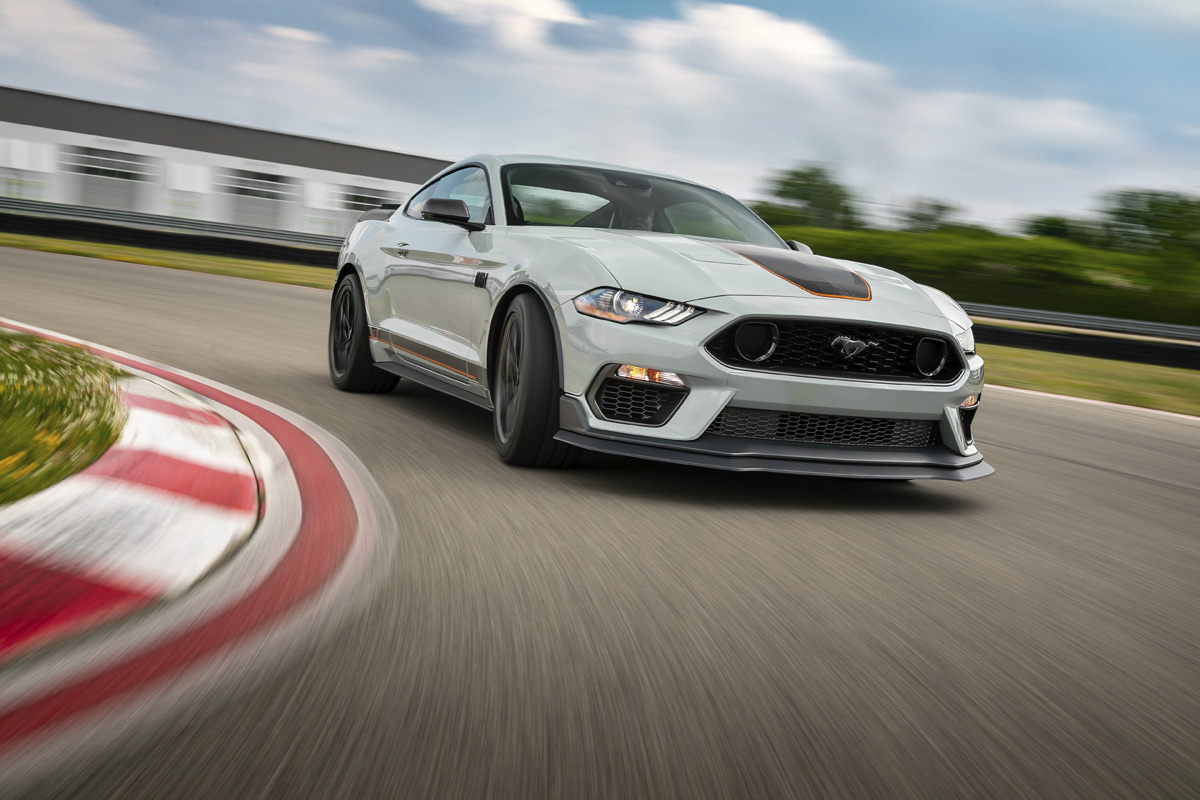 A front splitter optimized to the fascia shape improves track performance and provides a more aggressive appearance, while a matched rear spoiler works in concert to create lift balance. Mach 1 features 22% more downforce than a Mustang GT with Performance Pack Level 1 and the downforce improvement jumps to 150% with the Handling Package. To enhance track endurance, the team added two side heat exchangers – one to cool engine oil, the other transmission oil – as well as a rear axle cooling system and lower diffuser from Shelby GT500.

What’s more, a new underbelly pan extends 20 inches further rearward than on a Mustang GT Performance Pack to smooth and increase the airflow under the front of the car. It’s one of the vehicle’s most aerodynamically important upgrades. Large underwing features in the belly pan increase downforce, while special belly pan airfoils in the brake cooling ramps help to improve downforce and assist the brake cooling flow – a first for Mustang. 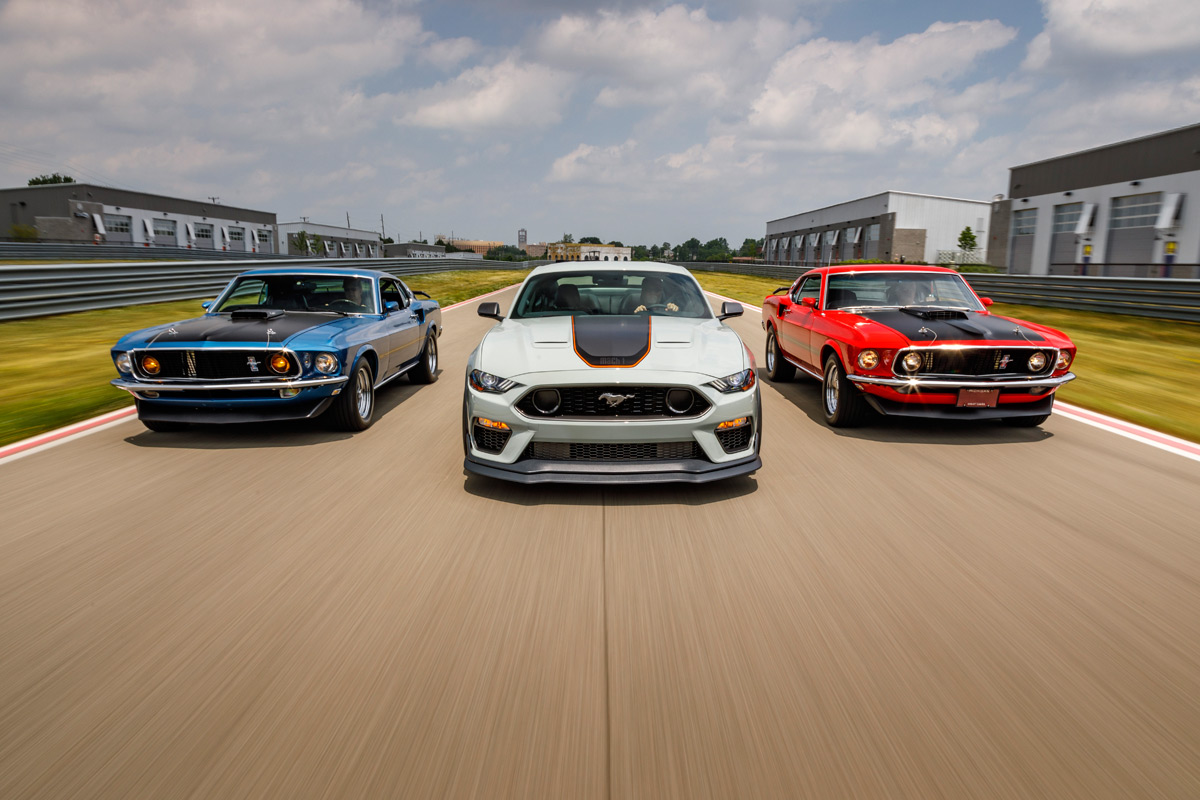