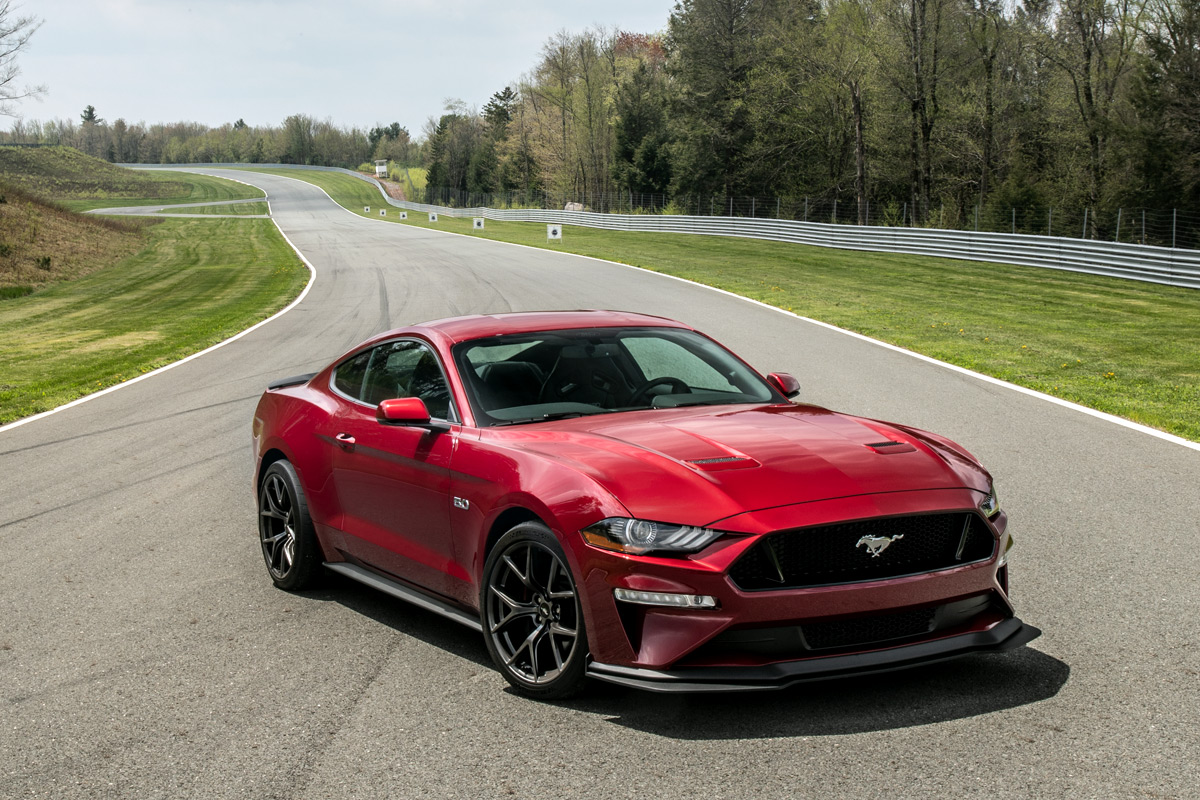 There’s no question about it, the mid-cycle refresh that the 2018 Ford Mustang received was a total game-changer, with the iconic pony car getting a host of upgrades in the styling, power, and handling departments, making the world’s best-selling sports car even better than before.

With 460 horsepower on tap, a 0-60-mph time of under four seconds (with the new 10-speed automatic transmission, which shifts lightning-quick), and the optional MagneRide active suspension system, this new Mustang performs like no other pony car before it, save for the track-ready Ford Mustang Shelby GT350.

But the passionate Mustang team couldn’t leave well enough alone, curious to see just how far they could push the performance of the new ‘Stang, focused on improving the car’s handling capabilities. To achieve this, they started by adding an aggressive front splitter (inspired by the Boss 302 Laguna Seca Mustang) and rear spoiler to deliver more downforce and gives the car more grip in the corners. 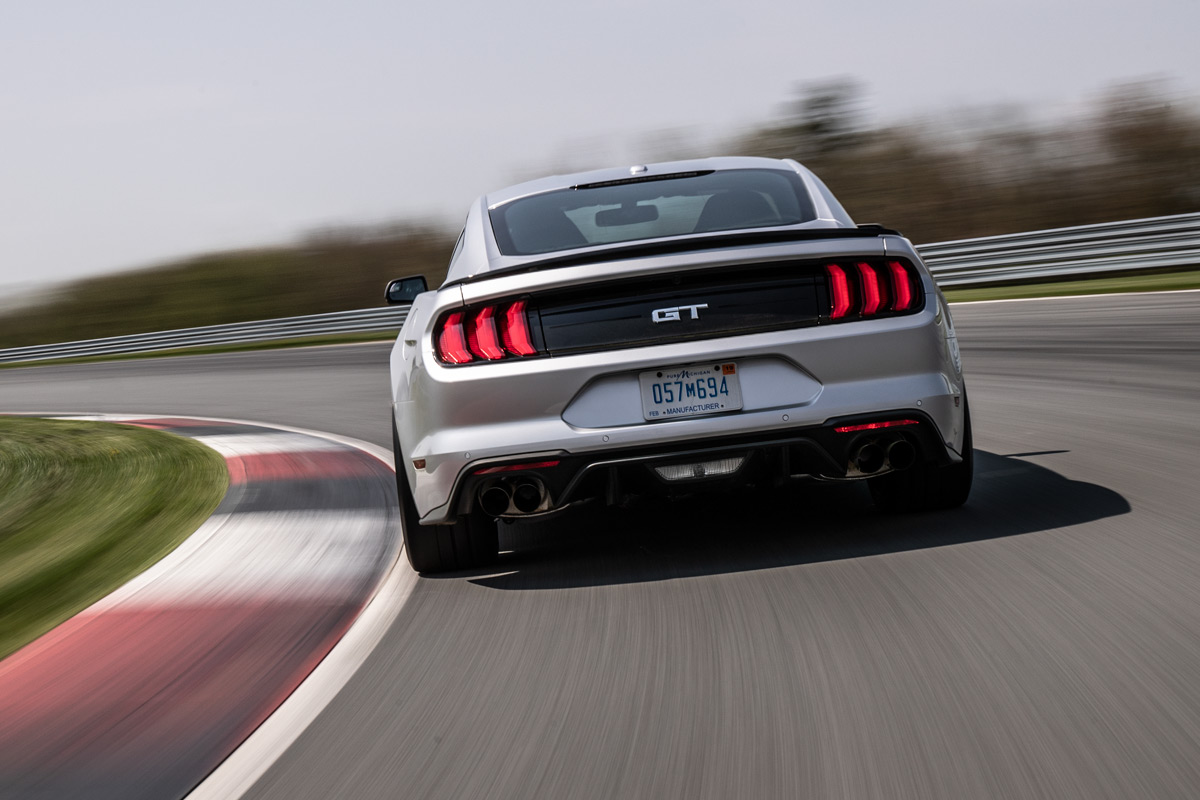 From there, they added a set of 305/30R19 Michelin Pilot Sport Cup 2 tires (1.5 inches wider than the wheels on Performance Pack Level 1) wrapped around 19×10.5-inch front and 19×11-inch rear wheels. These sticky tires provide a firmer grip and work with the retuned chassis to put the car more than a half-inch closer to the ground.

Custom tuned MagneRide dampers and quicker steering calibration provide better response. Other improvements over the Mustang Performance Pack Level 1 include a 67% stiffer rear stabilizer bar, a 12% stiffer front stabilizer bar, 20% stiffer front springs and rear springs that are 13% stiffer, all of which contribute to a more stable ride around corners with less body roll.

The results of their skunkworks efforts? The 2018 Ford Mustang GT Performance Pack 2, a $6,500 package for the Mustang GT that transforms the already-capable pony car into a true sports car, one that you can take to the track on the weekends. 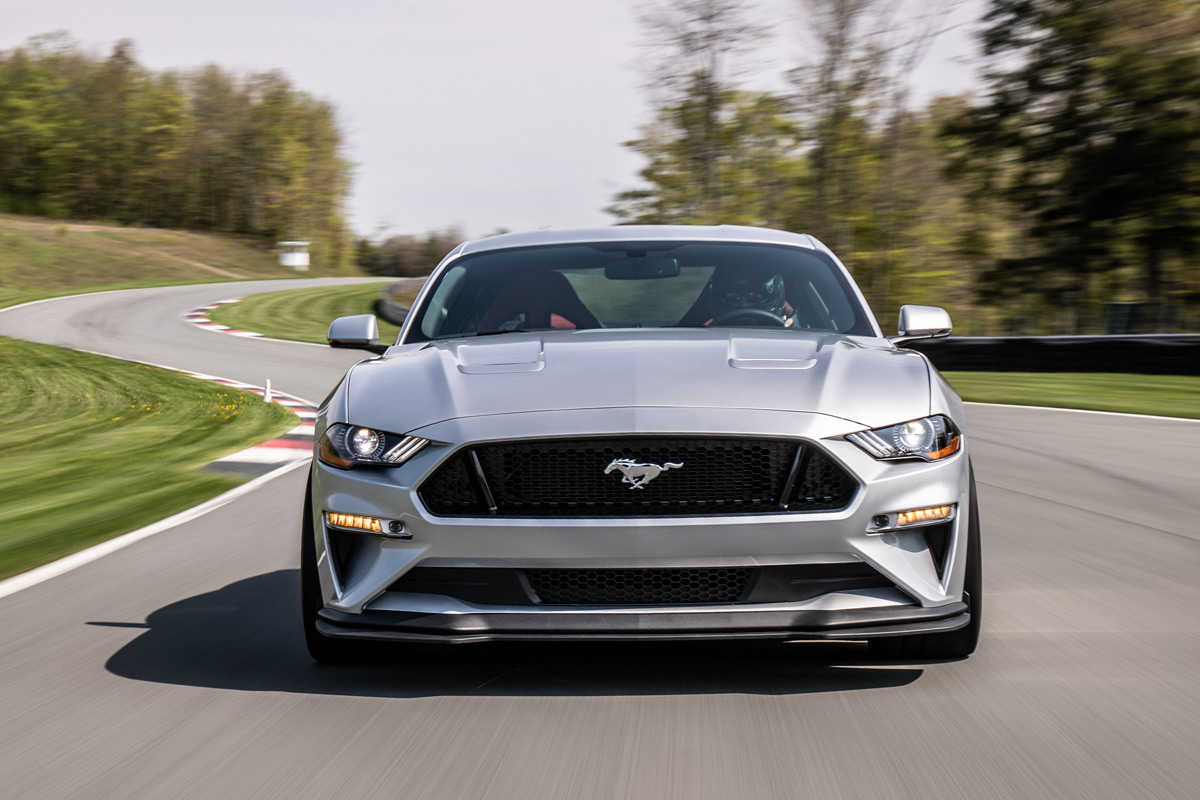 To prove that point, Ford invited us up to Monticello Motor Club for a track day with the Ford Mustang GT Performance Pack 2, and I was giddy with excitement, as this would be the perfect setting to showcase what this car could really do, as this challenging track will really highlight a car’s strengths and weaknesses. This was going to be a fun one!

The only problem? Rain. ?

Yes, Mother Nature decided to rain on our parade… literally, cutting our time with the Performance Pack 2 short. Still, we managed to get in one session on the track (one warm-up lap, two hot laps, and one cool down lap) before the rain started coming down. I hoped that we’d be able to continue driving in the rain (at a slower pace), but unfortunately the Michelin Pilot Sport Cup 2 tires are not suitable for rain the least, with very little tread to speak of. 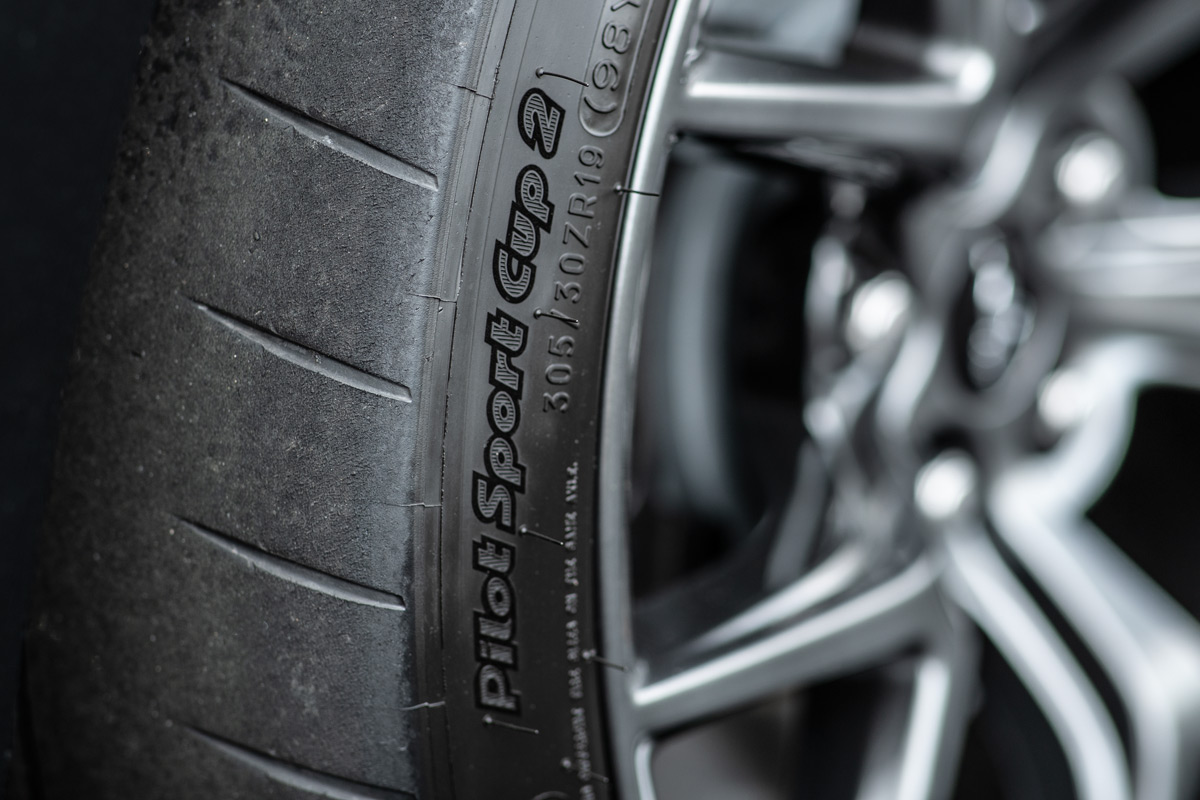 While I would have loved more time to really explore the Mustang PP2’s capabilities, from my brief time behind the wheel, I can tell you that this car felt right at home on the track, ripping through the course with surgical precision, with nary a squeal from those meaty tires, the Cup 2’s keeping the car glued to the road.

On the road, the Mustang was surprisingly comfortable, and one could realistically make this their daily driver (assuming they live somewhere where it doesn’t rain). The only issue is that those massive 305s up front lead to some tramlining on less than perfect roads. Still, it is a small price to pay for the handling benefits they provide on the track and in the twisties. 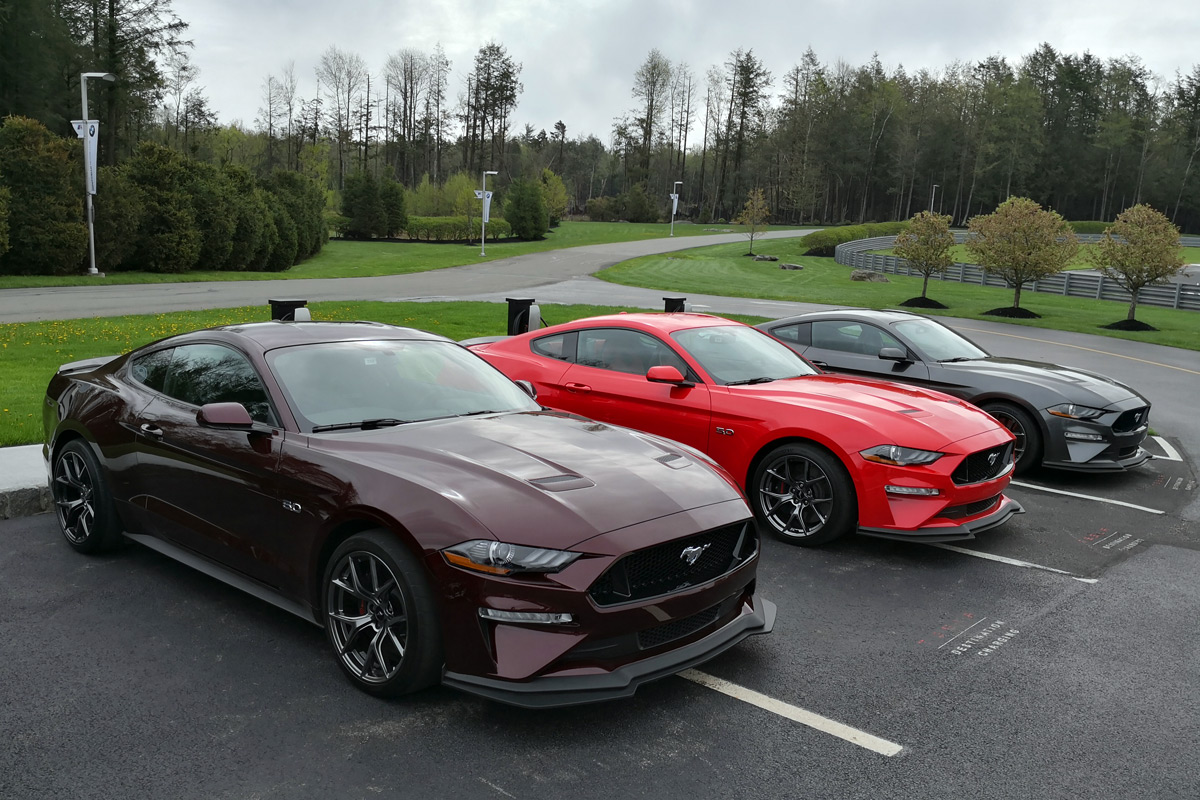 Mustang chief engineer Carl Widdmann says it best: “We wanted to do a car that maximized the ability to put the power down, to create a car that you’d love driving up through, say, the canyons around L.A. It’s not the ultimate track Mustang, it bridges the gap between the Performance Pack and the track-ready GT350.”

And that’s really the best way to describe it. Ford has built a number of different Mustang GT variants (base GT, PP1, PP2, Bullitt), all with different customers in mind. For most folks, the Mustang GT Performance Pack 2 is overkill. But if you’re an enthusiast like me who plans on driving your car hard, I think this $6,500 package is a no-brainer. 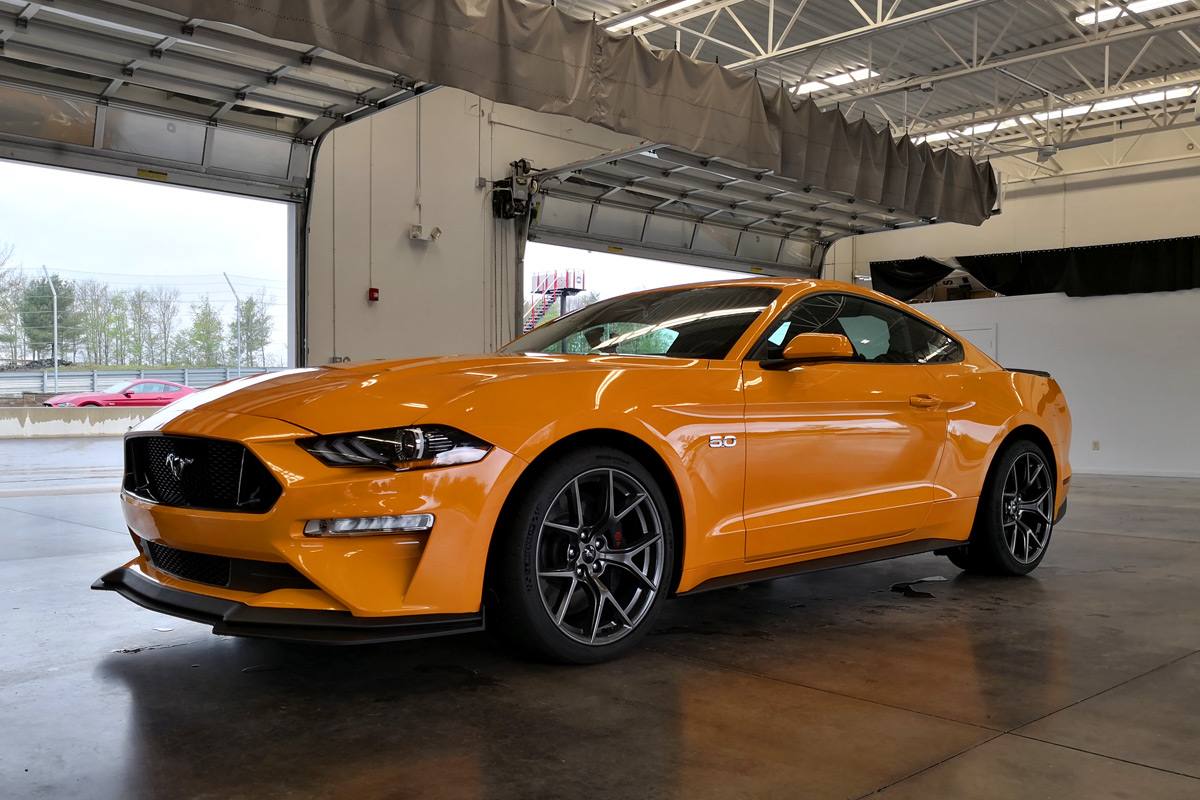