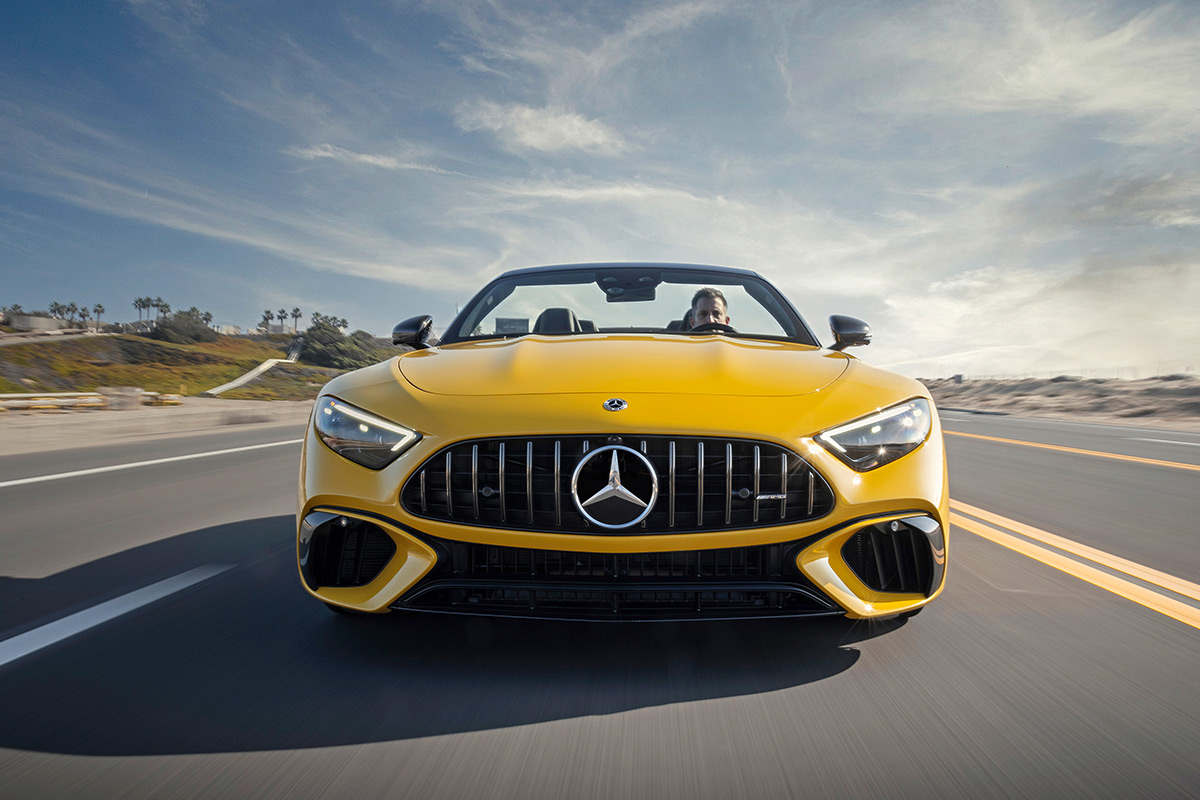 Awhile back, we told you about the all-new 2022 Mercedes-AMG SL, which has been transformed from a sleepy GT into a sexy sports car. At the time, the only details that were missing from the story was the all-important price.

Both Mercedes-AMG SL models will be offered in two specially curated trims for the U.S. market: Touring and Performance. Building upon a wealth of standard equipment, the trim lines provide a high level of sporty and luxurious features as well as a broad range of options for individualization.

For the first time in its 70-year history, the SL features a drive system acting on all four wheels. AMG Performance 4MATIC+ all-wheel drive technology is standard on both AMG SL models. The system’s fully variable torque distribution between the front and rear axles ensures optimum traction at the physical limit as well as high handling stability and a high level of safety under all conditions.

The new AMG SL also features a multi-link front suspension with five control arms arranged entirely within the rim, which is the first of its kind in a series-production Mercedes-AMG vehicle. This significantly improves the kinematics. At the rear axle, a 5-link design likewise controls the wheels.

The AMG SL 55 is fitted standard with a newly developed AMG RIDE CONTROL steel suspension equipped with high-performance aluminum dampers and lightweight coil springs. An innovative AMG ACTIVE RIDE CONTROL suspension with active, hydraulic roll stabilization is optional for that model and equipped standard on the AMG SL 63. The system enables optimal cornering and load change behavior, with typical AMG driving dynamics, precision and feedback for the driver. It also increases ride comfort when driving in a straight line and over bumps.

The luxury sports car is equipped with active rear-axle steering as standard – another first in the long history of the SL. Depending on the speed, the rear wheels steer either in the opposite direction (up to 62 mph) or in the same direction (faster than 62 mph) as the front wheels. The system is designed to improve cornering, maneuverability and handling stability.

Fitting of its triumphant racing pedigree, the new Mercedes-AMG SL is powered by a Handcrafted AMG 4.0L V8 Biturbo engine, assembled entirely by hand at the company’s site in Affalterbach according to the “One Man, One Engine” principle. The powertrain in the AMG SL 63 develops 577 hp and delivers 590 lb-ft of torque from 2,500 to 5,000 rpm. Accelerating from 0 to 60 mph takes only an estimated 3.5 seconds, while the top speed is 196 mph. In the AMG SL 55, the V8 unit produces 469 hp and 516 lb-ft of torque. The sprint from a standstill to 60 mph is completed in an estimated 3.8 seconds, on the way to a top speed of 183 mph. Both models feature the AMG SPEEDSHIFT MCT 9G transmission as standard, which combines an emotionally appealing gearshift experience with extremely short shift times.

Poised to transform the tradition of the iconic first 300 SL Roadster into the modern era, the all-new Mercedes-AMG SL will arrive in U.S. dealerships in the summer.

Trims at a Glance:

Sounds like fun, and I can’t wait to get behind the wheel of one.. Preferably an AMG SL 63 with the Performance Trim. 🙂

Pricing For The 2023 Corvette Z06 Has Been Revealed, And It’s Not Cheap
Ringbrothers “CAGED” Mustang Convertible Restomod Is All Kinds Of Awesome