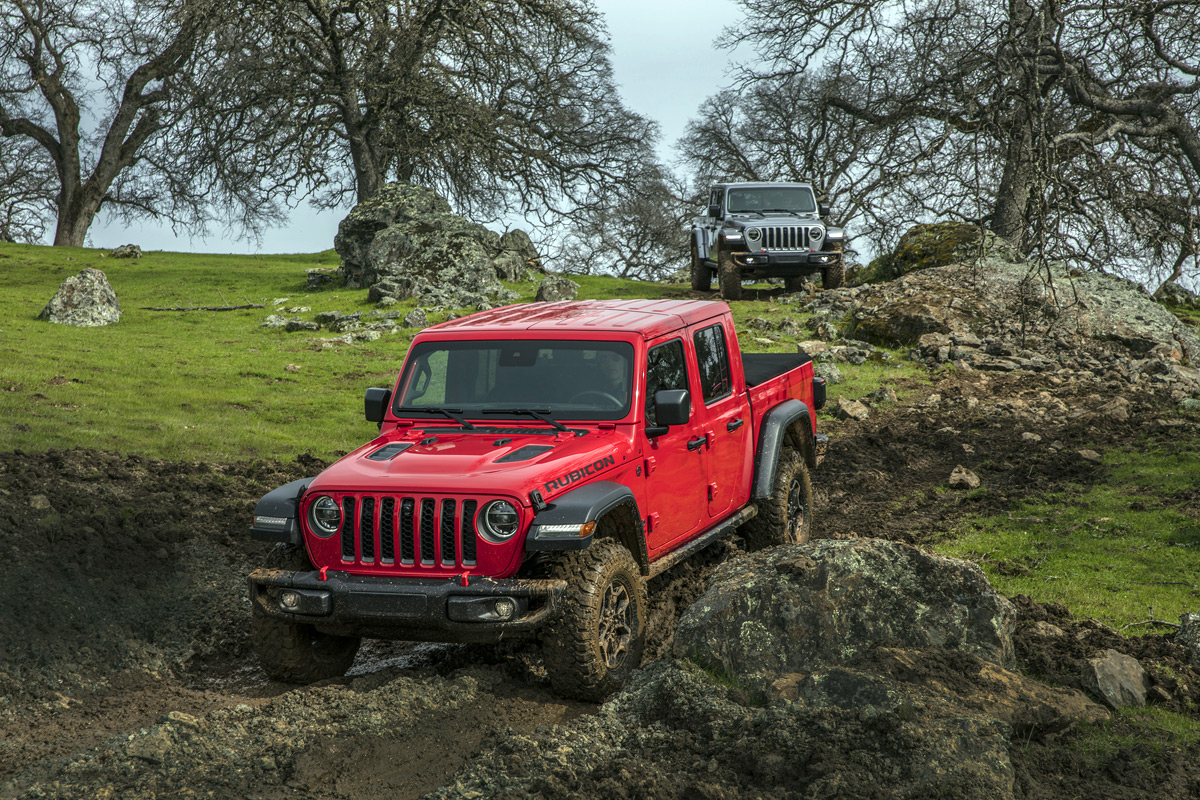 Jeep wanted our first drive of their new Gladiator pickup truck to be memorable. And so it was, with one of the best off-road courses we’ve driven in a long time, where we beat the hell out of the new Jeep pickup.. and it just kept on going.

Our adventure took place in central California, just outside of Sacramento, at a specially-made driving course made of rocks, mud, and sunshine. There, we drove the Jeep Gladiator Rubicon through some seriously hardcore obstacles before taking the scenic route back to the city in an Overland model.

The 2020 Jeep Gladiator is a pickup truck, through and through, with a design similar to the Jeep Wrangler Unlimited, but with far different engineering underneath. The Gladiator can tow up to 7,650 pounds and haul up to 1,600 pounds in its five-foot bed. That’s about double what the Wrangler Unlimited can do. That’s also better than any other midsize truck on the market right now. 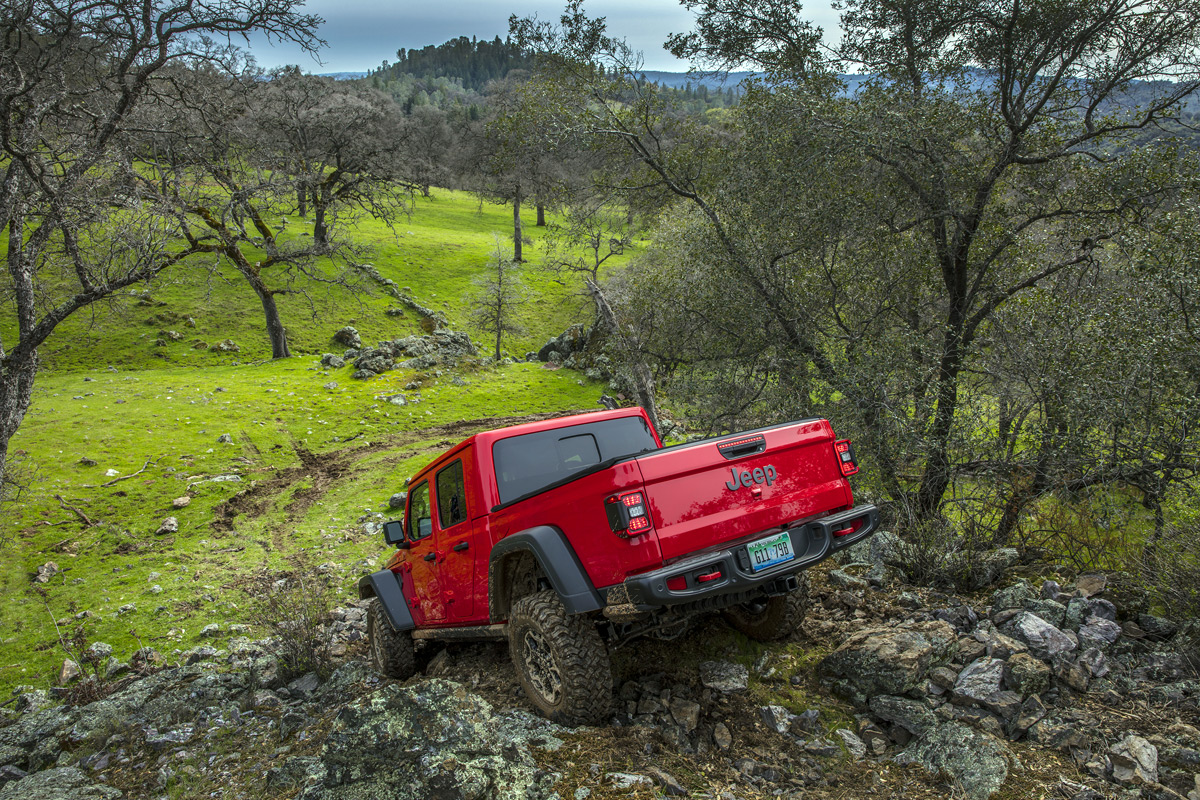 This means that Jeep Gladiator owners can get just about anywhere, through almost any kind of terrain–even if it requires up to 30 inches of water fording, which the Gladiator can do as-is. Plus they can bring other toys with them for even more adventure. Need to haul motorcycles, a snowmobile, kayaks, a bunch of camping gear, or most anything else? Gladiator can do that. Need to tow your jet skis or camper trailer too? Not a problem.

That’s what the Gladiator is all about. It’s not just a pickup truck or just another Wrangler. It’s a combination of the two that makes it about as adventure-ready as things can get. Plus the doors and roof come off and the windshield drops down. Seriously, how awesome is that? 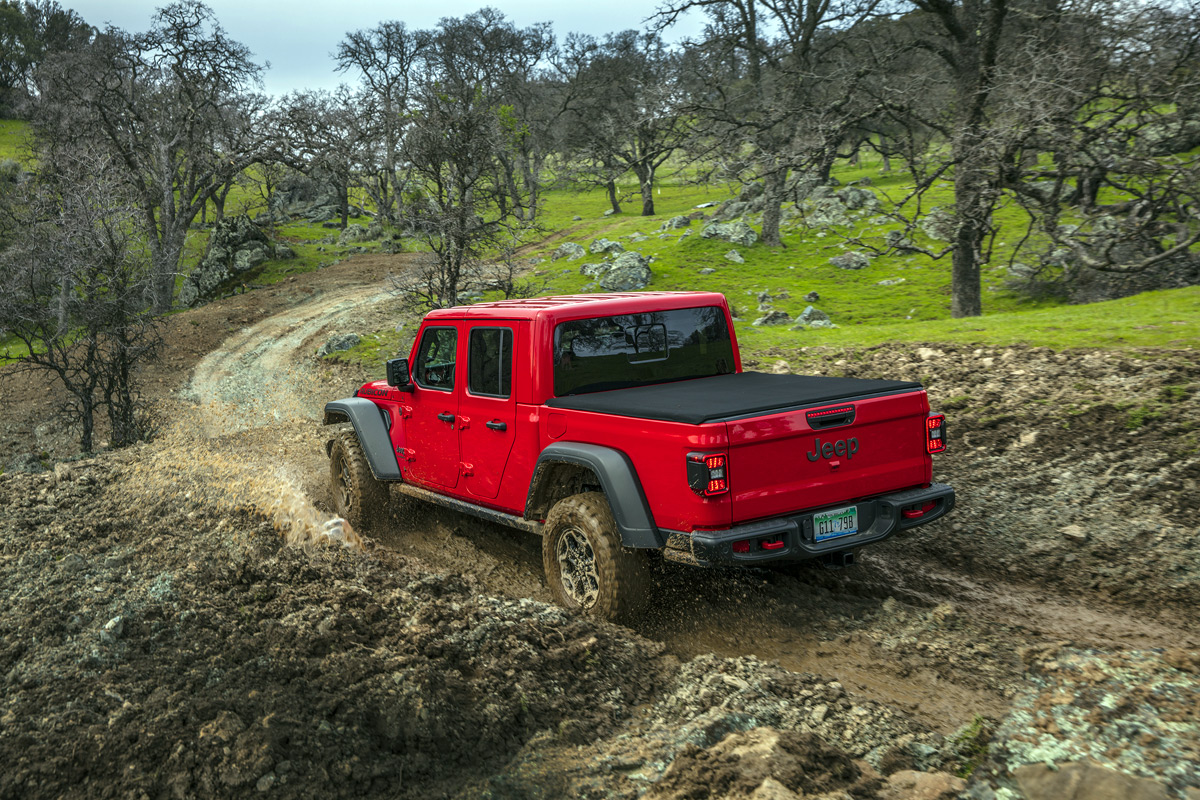 The 2020 Jeep Gladiator is powered by the same 3.6-liter V6 engine that powers the Wrangler models, with a few tweaks for better output, given the Gladiator’s larger size and capability. Many of those changes are in the transmission, which is tuned for the Gladiator’s capabilities. Better still, the 2020 Gladiator comes standard with a six-speed manual transmission and an eight-speed automatic is available in all trim levels. Including the Rubicon.

The V6 puts out 285 horsepower and 260 pound-feet of torque. The real magic happens when the ratios are added in. The engine pumps into the transmission and transfer case. At low gears in both, plus the 4.1:1 rear axle (3.73:1 on Sport and Overland models), there’s a total of 77.2:1 ratio at the wheel. That’s crazy amounts of power at lower speeds when off-road. 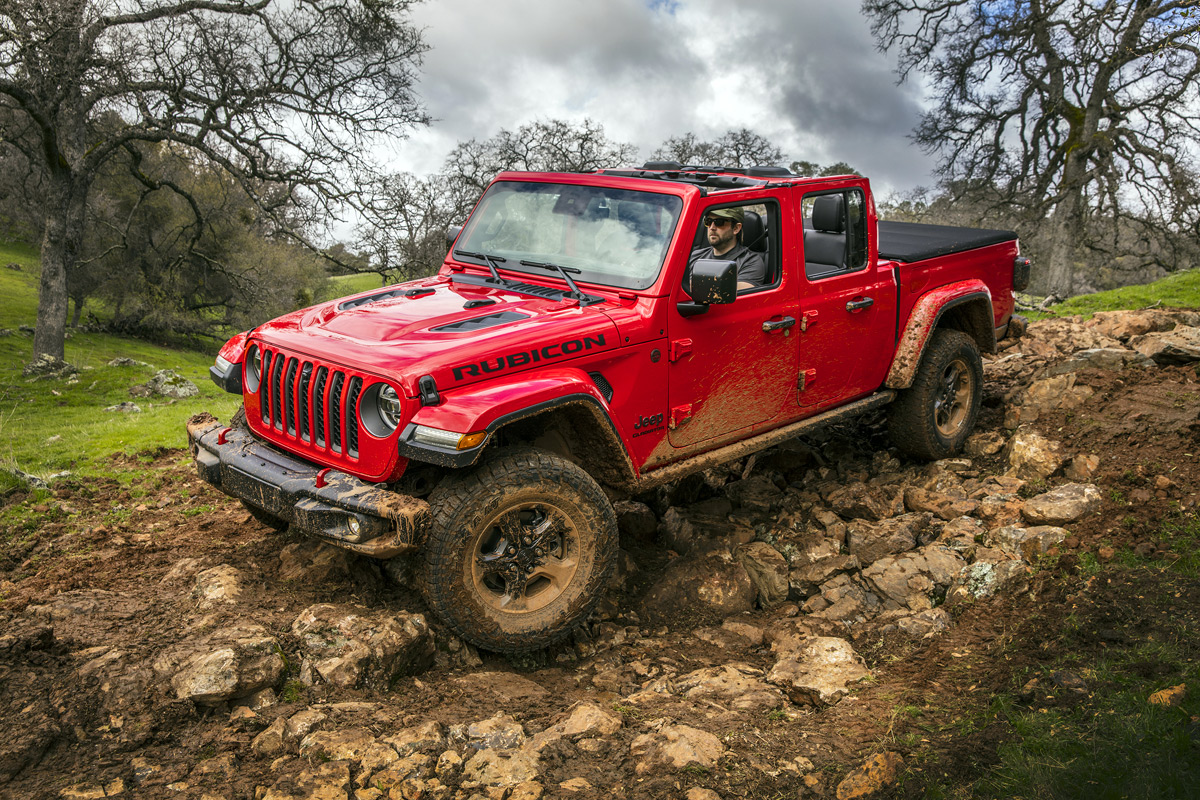 Then add in the Gladiator Rubicon’s hardcore off-road gear, including a complete set of skid and protective plating, tow hooks, a disconnecting sway bar, and steel bumpers, and you have got something. Now add on the crazy approach and departure angles of 43.6 degrees and 26 degrees respectively, and you have a breakover angle of 20.3 degrees. That’s only a couple of degrees away from the smaller wheelbase Wrangler Rubicon, the most capable off-roader on the market. Some of that is thanks to the Gladiator Rubicon’s 11.1 inches of ground clearance (about half an inch more than the Wrangler).

Step inside, and the Jeep Gladiator is basically exactly like a four-door Wrangler. There are a few minor differences, such as the available trailer brake controller, but it’s otherwise almost identical. Which is a good thing as the new Wrangler has everything done well inside. Like the Wrangler, the Gladiator’s doors and top can be removed in just minutes with the included toolset (and built-in storage box for the bolts). All roofs on the Gladiator, including the hard top, are removable and the hard top comes with removable front panels as standard. 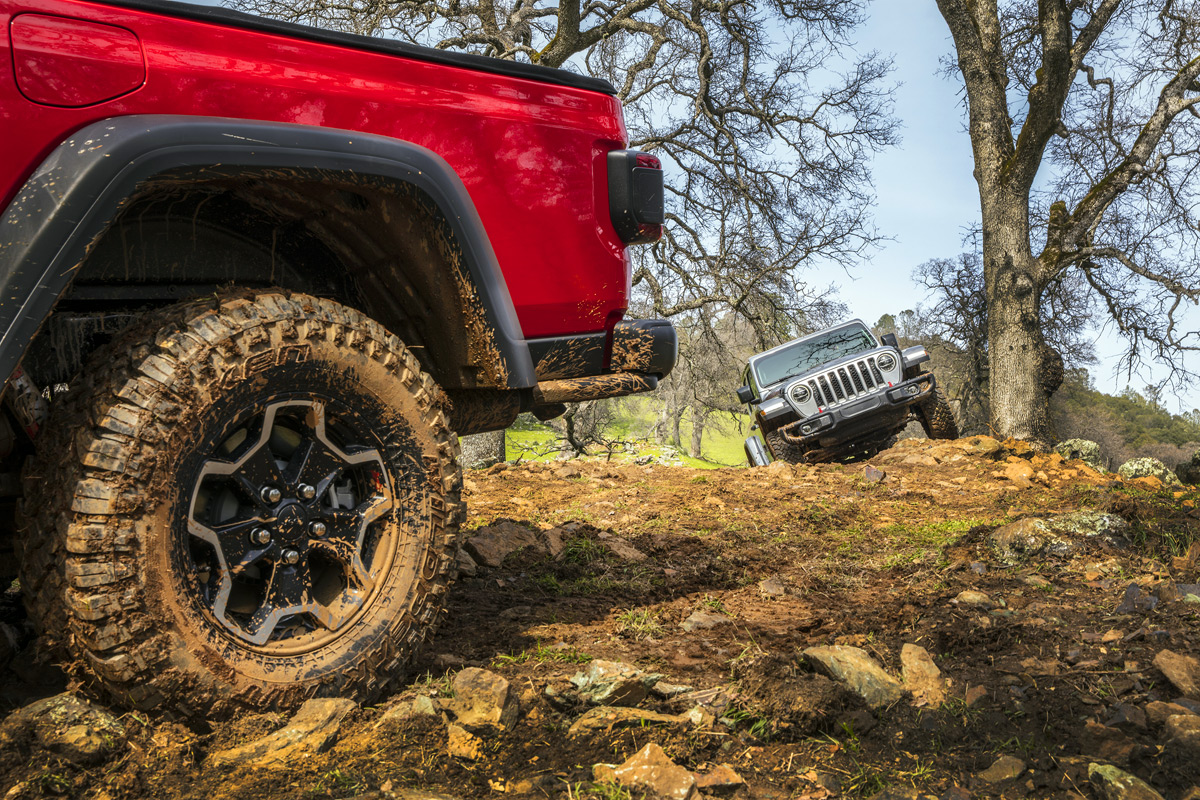 The new Gladiator features a rear seat storage underneath the rear cushions. Raising the lower portion of the seat reveals a lockbox that runs the length of the truck. It can be opened from either side (partially or in full) and it locks when the door locks are engaged–even if there are no doors currently installed. The seat bottoms also lock in place when the locks are activated, doubling the security. A nice touch. The removable, portable Bluetooth speaker that Mopar showed in the Wrangler is also available in the Gladiator, as are a host of other Mopar goodies.

As stated earlier, the underpinnings of the 2020 Jeep Gladiator are completely different from the Wrangler. The chassis is unique, built to be a truck capable of Jeep things, and the whole truck rides on unique five-coil springs. Several improvements for rigidity and load hauling are in-built, of course, and everything is designed for protection during hardcore off-roading. 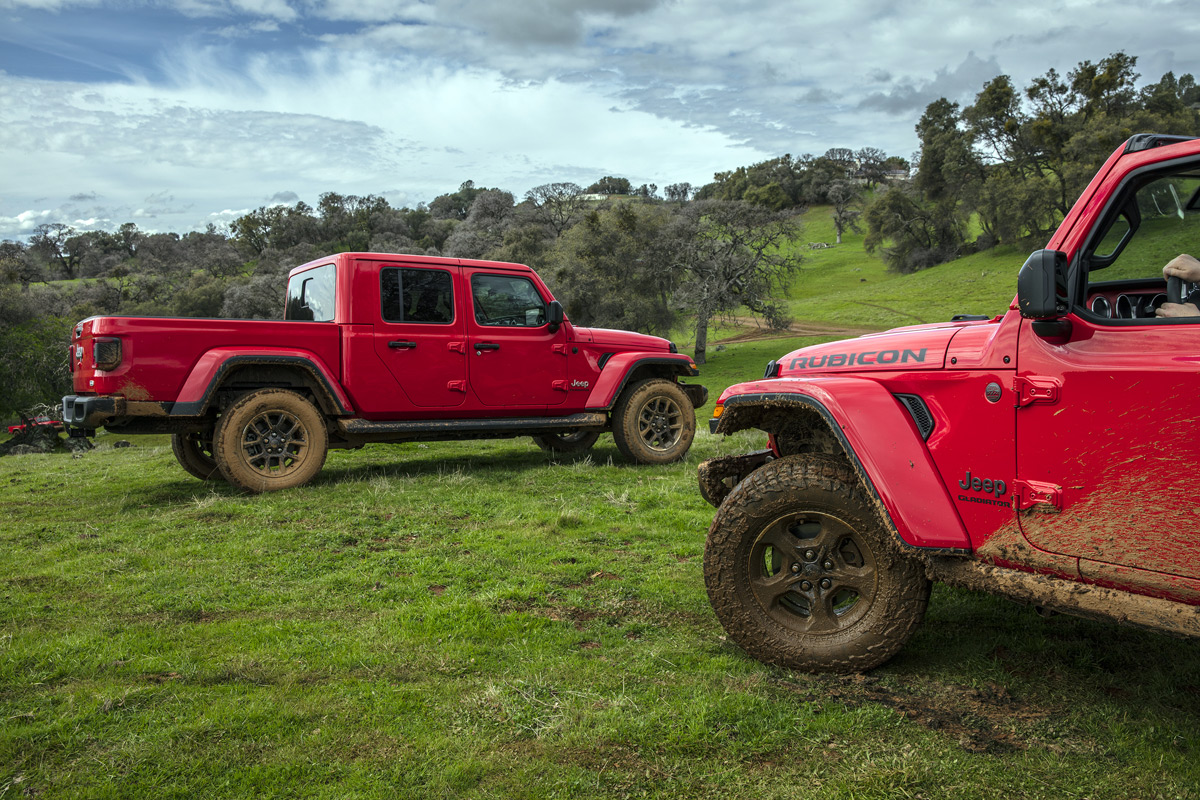 The 2020 Jeep Gladiator arrives in dealerships next month, with a base price of $33,545, and the Rubicon model starting at $43,454. It’s one heck of a truck, and we’re thrilled that Jeep listened to our pleas and finally brought it back!

Visit www.jeep.com to learn more about the 2020 Jeep Gladiator.