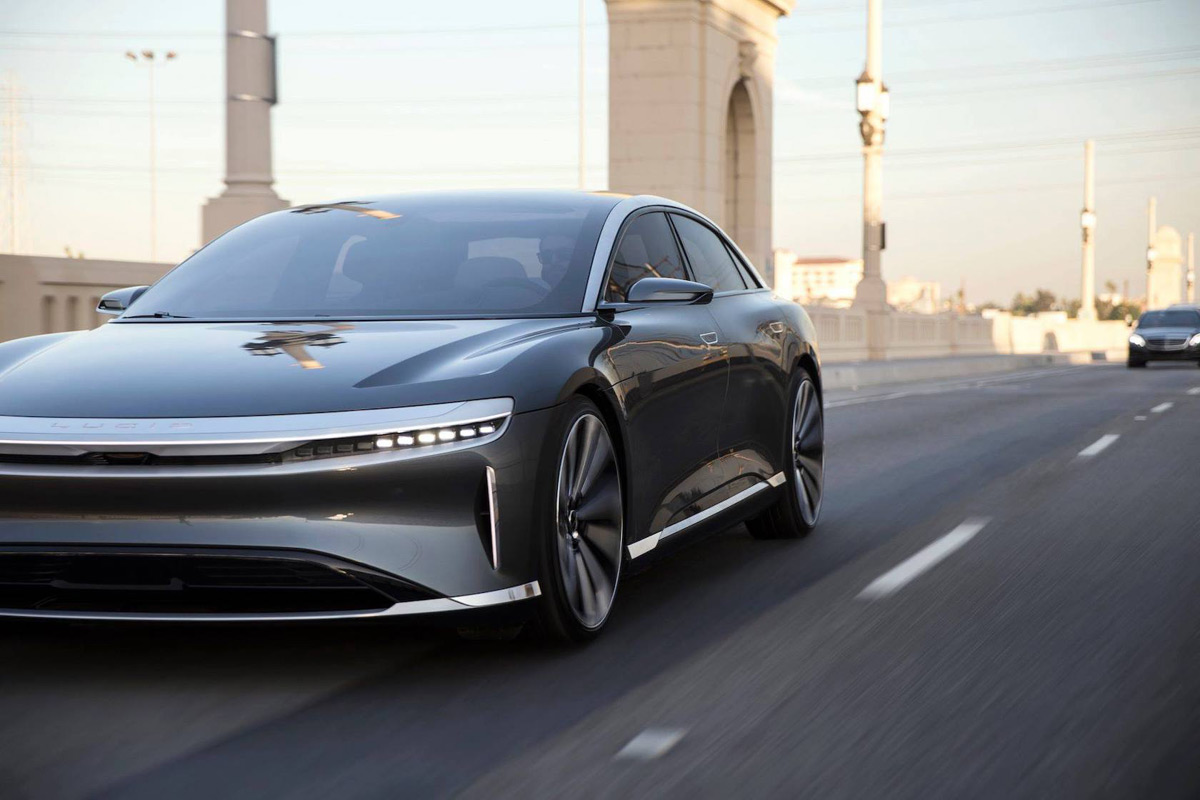 It seems like a week doesn’t go by without another EV brand claiming that they’re going to take down the mighty Tesla with their superior cars and technology. Spoiler alert… it hasn’t happened yet. Elon Musk was a true visionary, seeing the need for electric vehicles long before anyone else, and following through with both the cars and the infrastructure, making Tesla a $300 Billion juggernaut today.

Along the way, various startups and automakers have tried (unsuccessfully) to replicate Tesla’s success story, delivering cars that lacked range, power, style, or substance in the cases of the vaporware cars that never came to fruition. Ford thinks they’ve cracked the code with their upcoming Mustang Mach-E, but I’m not a believer just yet.

But one company that’s been on my radar for awhile is Lucid Motors, which was founded back in 2007. While initially focused on building electric vehicle batteries and powertrains for other car companies, they began development of their first car in 2014. And with Peter Rawlinson on board as Lucid CEO (former VP of Engineering at Tesla who was instrumental in the development of the Model S), I’m liking their odds.

Lucid Motors just unveiled their long-awaited Lucid Air, a luxury electric sedan which makes some impressive claims, like an an estimated EPA range of over 500 miles, 0-60 mph in under 2.5 seconds, a quarter-mile time of 9.9 seconds, and deliveries starting in spring 2021. It sounds too good to be true, and their timetables sound a little ambitious, but who knows, maybe they can pull it off after all. We’ll just have to wait and see.. 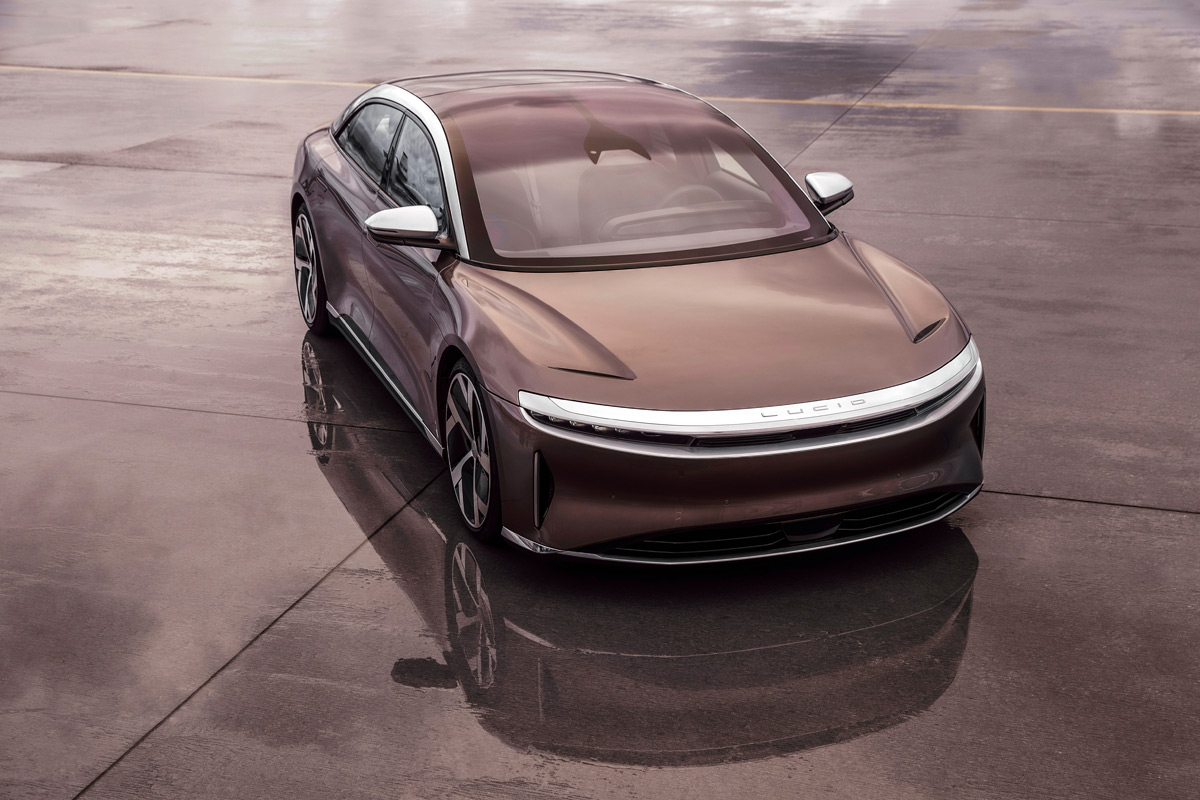 Lucid dumped a ton of information during their unveil, so if you want more details, you can read the official press release here:

NEWARK, CA, Sept. 9, 2020 — Lucid Motors, which seeks to set new standards for sustainable transportation with its advanced luxury EVs, today unveiled production details for the highly anticipated Lucid Air in a global web broadcast from its Silicon Valley headquarters. Having already set new industry benchmarks in the EV and luxury segments in key areas related to performance, efficiency, and design, deliveries of this new pure-electric luxury sedan will start in spring of 2021.

“Lucid Motors is driven to make the electric car better, and by doing so, help move the entire industry forward towards accelerated adoption of sustainable mobility. The goal of this relentless approach to developing the world’s most advanced electric vehicle is to benefit all mankind with sustainable, zero emission transportation, and to also attract new customers to the world of EVs,” said Peter Rawlinson, CEO and CTO, Lucid Motors. “With the Lucid Air, we have created a halo car for the entire industry, one which shows the advancements that are possible by pushing the boundaries of EV technology and performance to new levels.” 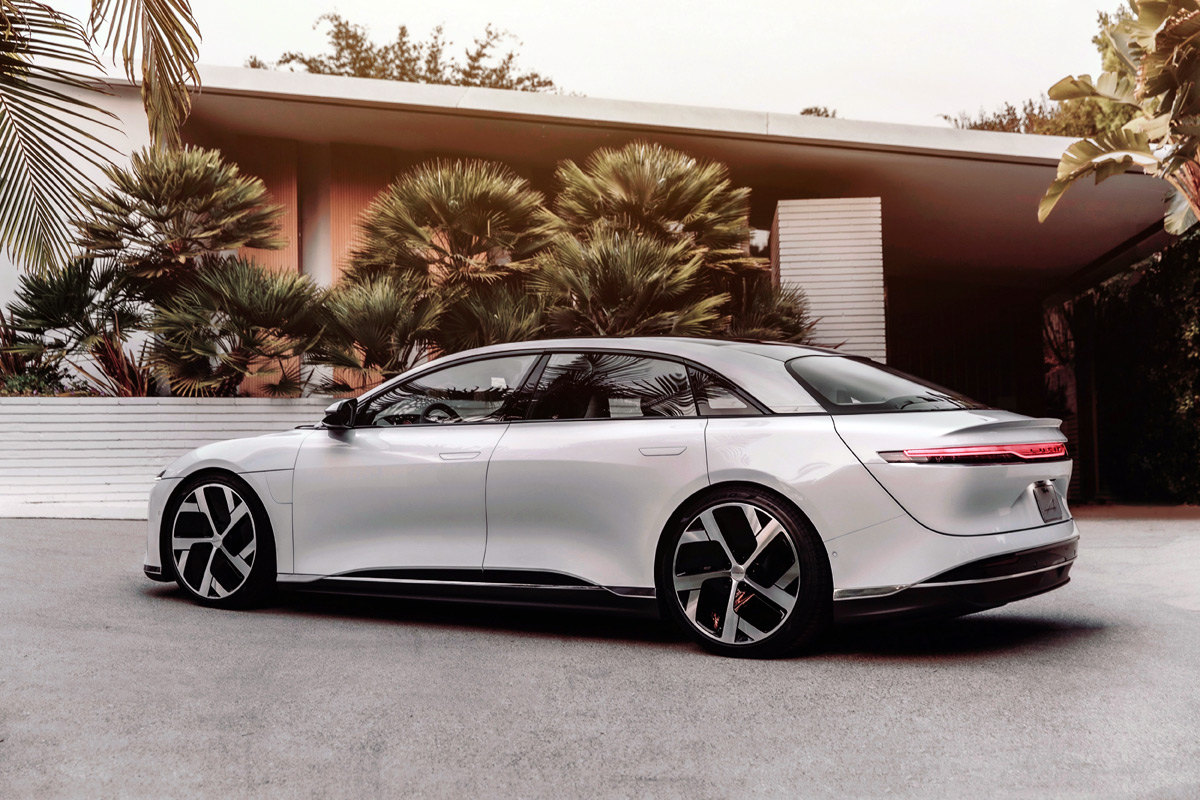 Using Space to Create the Air

Lucid Air is the result of a revolutionary approach to automotive packaging called the Lucid Space Concept, which capitalizes upon the miniaturization of Lucid’s in-house developed EV drivetrain to optimize interior cabin space. The concept is central to the architecture of the Lucid Electric Advanced Platform (LEAP) upon which the Lucid Air, and forthcoming Lucid vehicles, will be built. It’s a holistic, clean-sheet approach to advanced EV construction, without using existing “off the shelf” solutions so often seen in EVs from legacy automakers.

By simultaneously making smaller yet more powerful electric motors and dramatically improving the packaging of the entire electric powertrain, Lucid is able to reclaim that space for passengers and their comfort. This extends the philosophy of hyper-efficiency embedded in every facet of Lucid Air, from energy to spatial efficiency, delivering an unprecedented combination of range, practicality, performance, and luxury.

The Space Concept also contributes to the subtly different and modern proportions for the Lucid Air, without relying on any traditional automotive design cues, instead delivering a beautiful car that looks entirely distinctive on the road.

“When we embarked on this journey at Lucid Motors and the development of our first vehicle, the Lucid Air, we refused to compromise. We decided early on that we were going to pursue every facet of performance, innovation, and luxury,” said Derek Jenkins, VP of Design, Lucid Motors. “The result is that we are building the best car in the world, the numbers simply speak for themselves. What’s more, we did all this without ever sacrificing the beauty of the Lucid Air, which will stand as the first example of a car being created from a clean sheet to leverage the total design freedom that an EV architecture provides.” 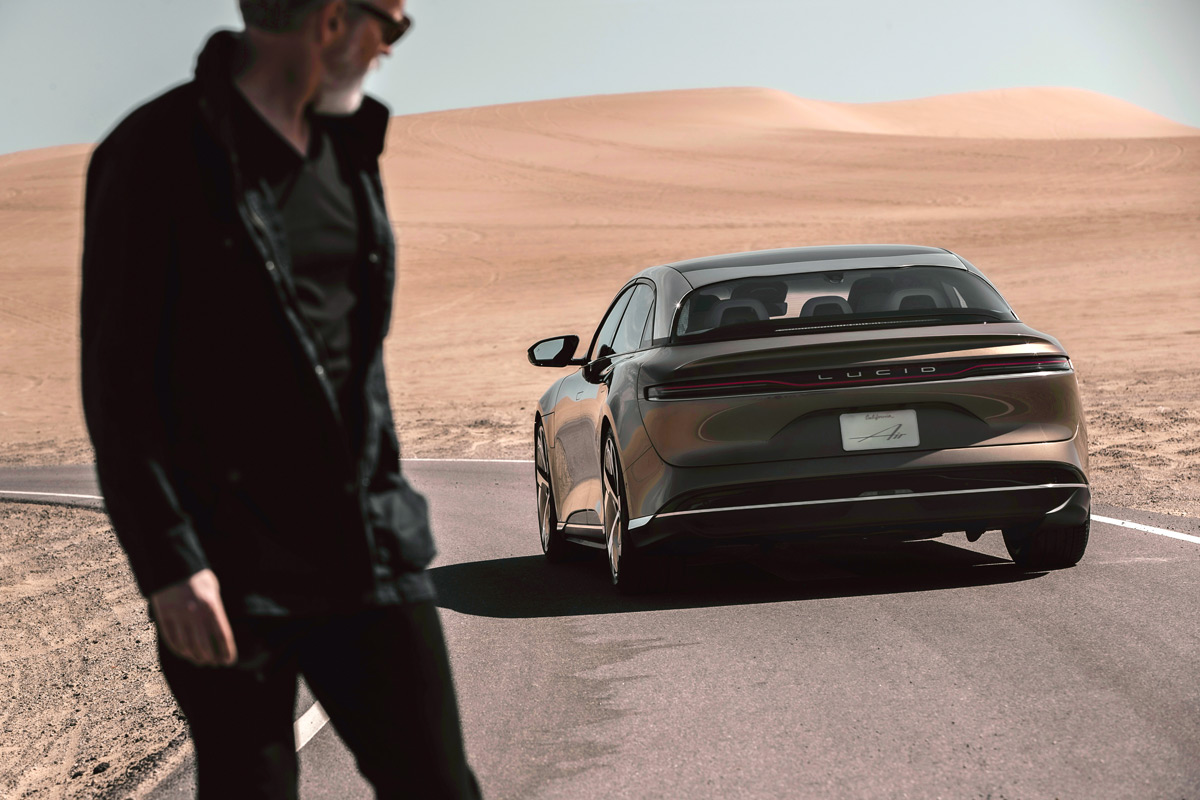 Taking its cues from California, the state’s spirit is embedded in not only all of Lucid Motors’ products, but also in the retail and digital experiences the brand is creating. As the name implies, Lucid is also inspired by the notion of seeing things differently and making those dreams come true. It’s summed up in the brand tagline of “Dream Ahead,” which is also the company’s vision for rejecting the status quo and always pushing the boundaries in EV technology.

“The Lucid brand was created with a progressive, post-luxury mindset ideally suited to meet the rapidly evolving needs of the most progressive buyers. We are heading into a future where conscious consumers see sustainability, advanced design, and technical innovation as equally important to more traditional luxury values of quality and craftsmanship,” said Jenkins. “We consider Lucid to be at the forefront in a shift in consumer preferences toward new brands that offer direct relationships alongside products featuring entirely new levels of technology, performance, and design.” 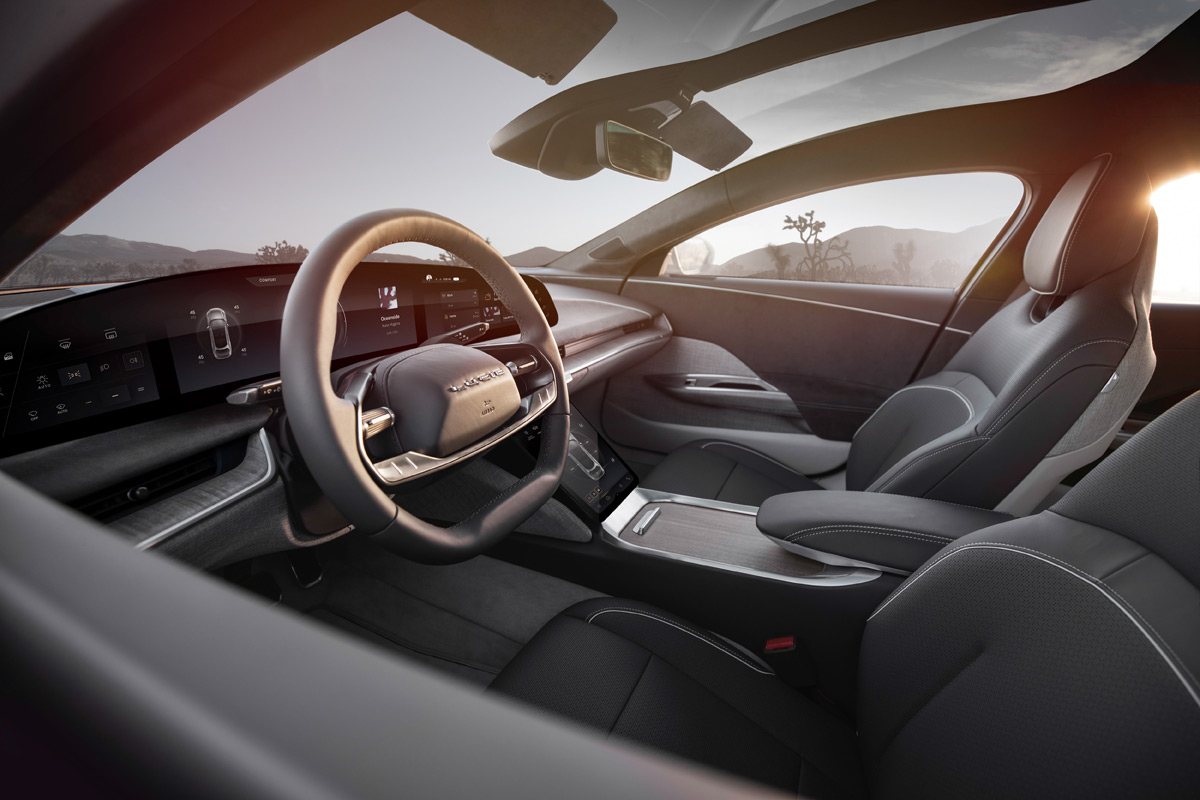 Setting New Standards at Every Level:

Record-breaking Performance and Range
With up to 1,080 horsepower available in a dual-motor, all-wheel-drive architecture, the Lucid Air is able to achieve quarter-mile times as quick as 9.9 seconds on a consistent, repeatable basis. To date, it’s the only electric sedan able to achieve a quarter-mile time under 10 seconds. The power of the Lucid Air is complemented by an available extended-range capability that achieves an estimated EPA range of up to 517 miles on a single charge.

World’s Fastest Charging EV
When it arrives to market, the Lucid Air will also be the fastest charging electric vehicle ever offered, with the capability to charge at rates of up to 20 miles per minute when connected to a DC Fast Charging network. For owners charging their Lucid Air in real-world conditions on the road, that can translate into 300 miles of range in just 20 minutes of charging. 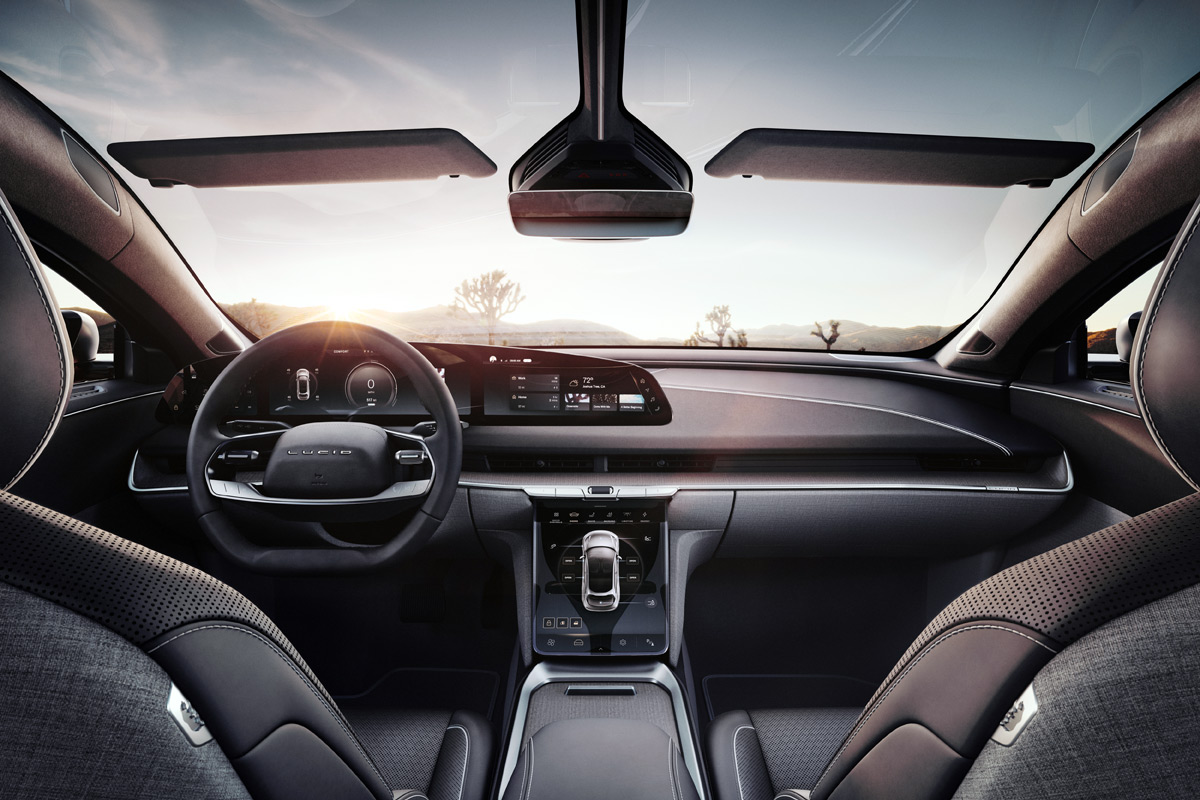 The Most Aerodynamic Luxury Car in the World
The Lucid Air is the world’s most aero-efficient luxury car, with tests completed at Windshear’s advanced rolling-road wind tunnel verifying a coefficient of drag of 0.21.

Advanced Glass Cockpit Displays Combined with Tactile Physical Controls
The interior of the Lucid Air reflects a revolution in how next-generation free-form displays are elegantly integrated into the design architecture of the cabin, providing a beautiful and seamless way of interacting with the vehicle software and human-centric user interface. In front of the driver is a 34-inch curved Glass Cockpit 5K display that “floats” above the dashboard, contributing to the light and airy feel of the interior. In addition, a retractable central Pilot Panel sits in finger-tip reach of the driver and passenger for deeper control of the vehicle’s systems and functions. To complement the digital displays, several highly tactile, precision-milled physical controls are present, including ribbed turbines for steering wheel functions, a volume control roller, and alloy toggle switches for tuning climate settings.

The Next Level in ADAS
The Lucid Air’s advanced driver-assistance system (ADAS), Lucid DreamDrive, is a first-of-its-kind platform combining the most comprehensive sensor suite on the market with a cutting-edge Driver Monitoring System (DMS), all standard on the Lucid Air Dream Edition. It is the first system of its kind to offer 32 sensors, covering vision, radar and ultrasonics, plus the world’s first standard high-resolution LIDAR in an EV, all working alongside the standard DMS and geo-fenced HD mapping to provide the safest possible approach to Level 2 and Level 3 driver assistance technologies. 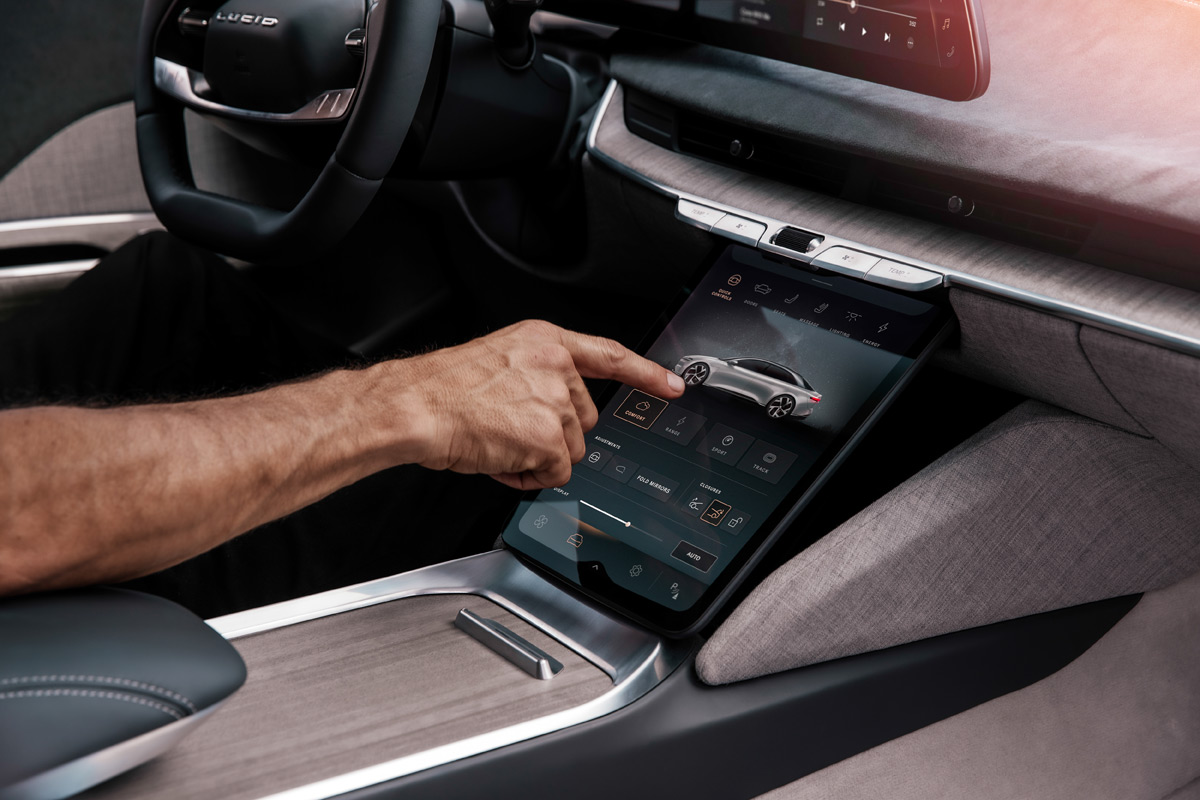 Alexa Voice Natively Integrated into Lucid Air
Lucid has collaborated with Amazon to bring an advanced Alexa Built-In implementation directly into Lucid Air. This enables the driver and passengers to enjoy the full Alexa experience on the go – including navigation, calling, streaming media, smart home control, and adding items to a shopping cart or to-do list – all while keeping their eyes on the road and their hands on the wheel. The Lucid implementation of Alexa also provides an expanded set of localized vehicle control features of Lucid Air including HVAC, all with a simple voice command. When a driver uses Alexa there will also be visual support for commands via the Lucid Air’s Glass Cockpit display. Over time, the available feature set will continue to grow via Lucid’s built-in Over-the-Air (OTA) updates.

The Lucid Air will be available initially in North America, offered in four model ranges: 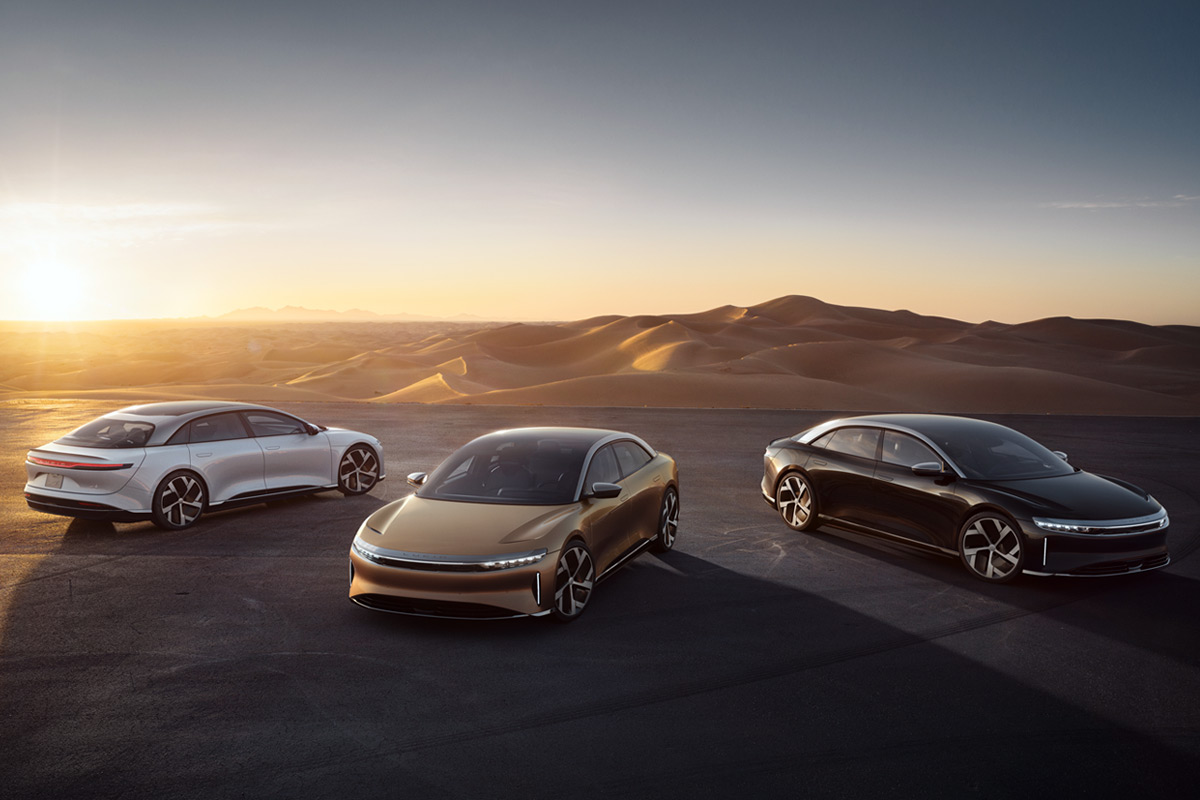 Dream Edition
The Lucid Air Dream Edition will feature a unique combination of Lucid attributes and technology, combining incredible performance with exceptional range. The 1,080hp luxury EV sedan will be available in Stellar White, Infinite Black, or a Dream Edition-exclusive Eureka Gold finish. Each color will come with an exclusive “Santa Monica” themed interior trim package, including full Nappa grain Bridge of Weir leather throughout and silvered Eucalyptus wood accents. The Dream Edition will also feature a unique 21-inch “AeroDream” wheel design and be highlighted by special badging and trim that marks its position as a limited-production halo edition of the Lucid Air.

Touring and Grand Touring Editions
The heart of the Lucid Air lineup will be the Air Touring and Air Grand Touring models, which offer 620hp and 800hp respectively. The Air Grand Touring will have range available up to the recently announced estimated EPA rating of 517 miles. Full details of available configurations and all Air models can be found on the Lucid Motors website following the reveal show on September 9, 2020.

Availability
Reservations are open now for customers across the US and Canada. Those who are inspired can reserve the Lucid Air via a $1,000 USD refundable deposit or the limited production Dream Edition with a $7,500 USD refundable deposit. The luxury sedan will also be available through the 20 Lucid Studios and Service Centers that are planned to be open across North America by the close of 2021. European and Middle East market delivery dates, pricing, and sales and service center details will be announced at a later date.

Production at the Lucid Motors factory in Casa Grande, Arizona, will begin in the coming months, with deliveries of the Lucid Air to North American customers to commence in spring of 2021.