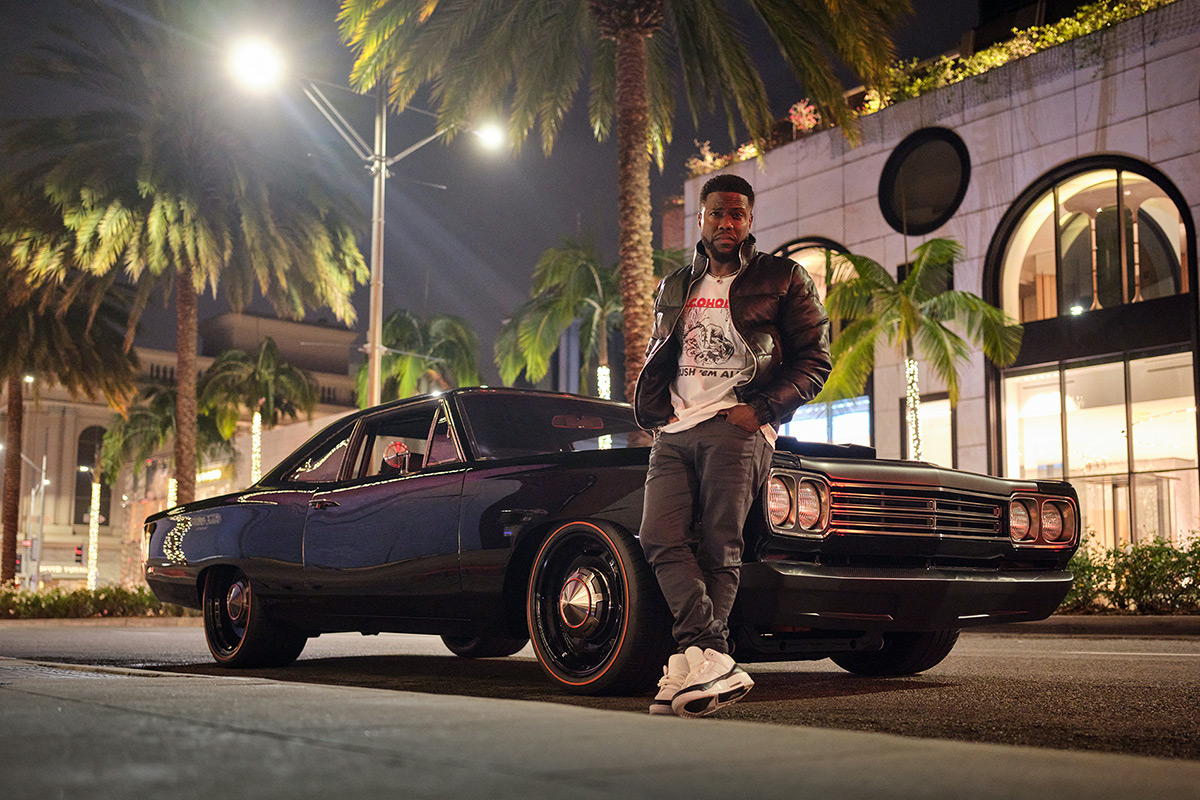 It’s no secret that comedian/actor Kevin Hart is a big car guy, with a passion for American muscle cars. And he’s not merely a collector, he likes to jump in and drive. In Los Angeles traffic. On hot summer days. And while the contents of Hart’s garage might be older than the owner, he enlists specialized craftsmen to ensure each car has the performance and reliability he needs, giving them the restomod treatment.

One of those craftsmen is Wisconsin-based Dave Salvaggio. The pair worked together on previous projects, and Kevin knocked on the door of the new Salvaggio Design workshop to outline his next ambitious plan. His vision was a tribute to the Mopar muscle of the late 1960s.They decided that a 1969 Plymouth Roadrunner was the ideal platform for this build.

Working with Salvaggio Design lead designer Sean Smith, a timeless heritage build was imagined, embracing true Mopar muscle car spirit. Hart’s priorities were a Hemi engine, custom carbon fiber pieces, a sinister black and orange Halloween appearance, and aggressive stance with modern components. He wanted a vehicle that would appear simple and industrial, choosing traditional hubcaps to conceal the modern wheels, for example. They created a car that people could admire from a distance, but only truly appreciate its sophistication when up close. Hart’s vision demanded the Roadrunner would be all about the detail. 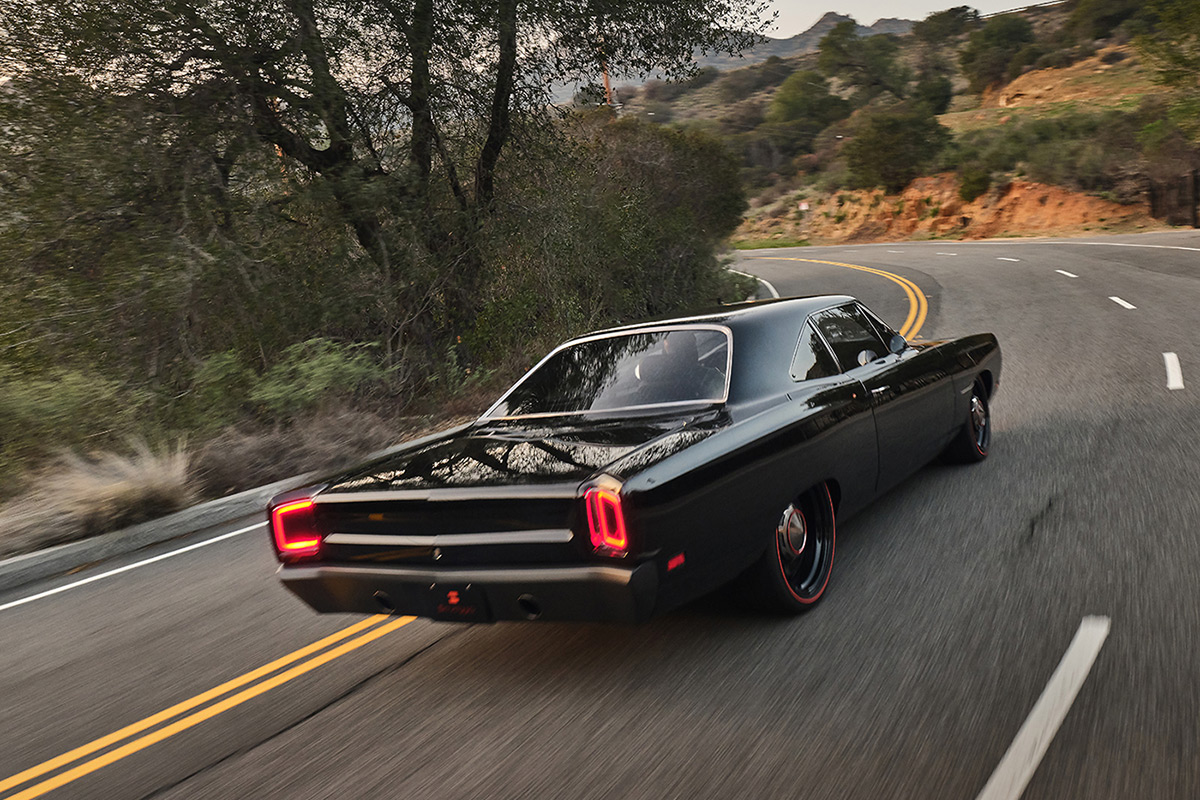 Starting with a sound donor car, the team at Salvaggio Design used 3D scanning to create a computer model before designing a custom frame with CAD software. Accepting valuable input from Detroit Speed & Engineering on its X-Gen 595 front suspension package, the frame was fabricated by Salvaggio team members Craig Provencher, Telly Violetto and Randy Russell. The result proved so successful that the frame will soon be available separately for all Mopar B body platforms.

The same metalworkers built the roll cage, fabricated removable floors, a custom firewall, radiator support, wheel tubs, trunk, and more. They also shaved the drip rails to create cleaner lines without diminishing the original Plymouth design. When the paint was dry, the only original parts on the car were the roof, doors, fenders and rear quarter panels. Everything else was replaced, revised or rejuvenated.

Among the new panels was a carbon fiber hood designed by Sean Smith who integrated styling cues from the Roadrunner’s A12 race package. Sean also devised the flush-fitting carbon fiber bumpers that adorn the vehicle, manufactured by Brothers Composites. 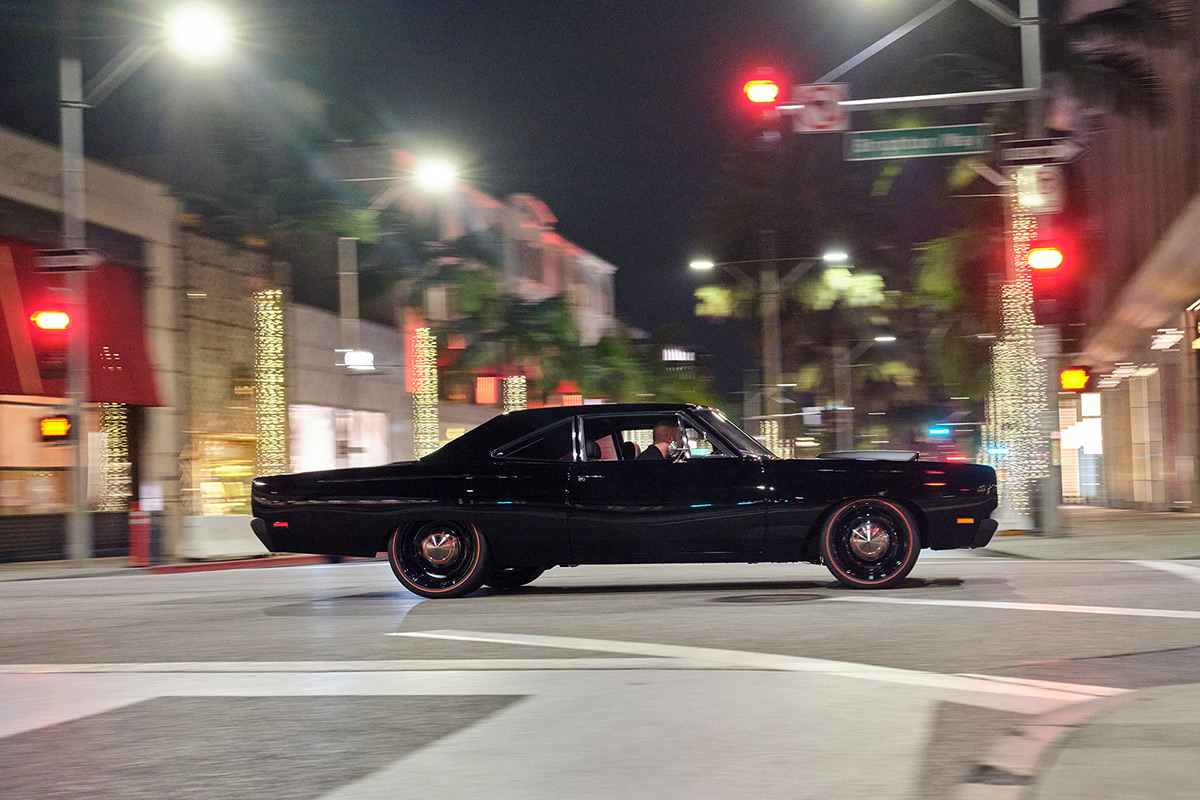 The bodywork, metal finishing and paint was undertaken by Mark Klos at Salvaggio Design, along with Eric Johnson on paint finishing. Mark and the team spent countless hours sanding and shaping the Roadrunner’s sharp line and long panels until it was ready for multiple coats of pure BASF Black paint. It has a high gloss exterior, matte clearcoat for the interior, and matte orange pearl underneath.

While the bodywork was underway, Sean designed a plethora of billet parts. Each was created in 3D by Mike Gundert from RAZ Technical Solutions and machined from solid aluminum. The headline act is the three-piece grille that borrows from the original but turns it up to 11. The machined metal was finished in brushed nickel by the artisans at Ogden Chrome, who contributed significantly to the project.

The next billet project was the driver’s door mirror. Inspired by the original again, it takes the mirror to a place never imagined in 1969. The finish repeats the brushed nickel and adds a Halloween orange flourish to catch the eye. 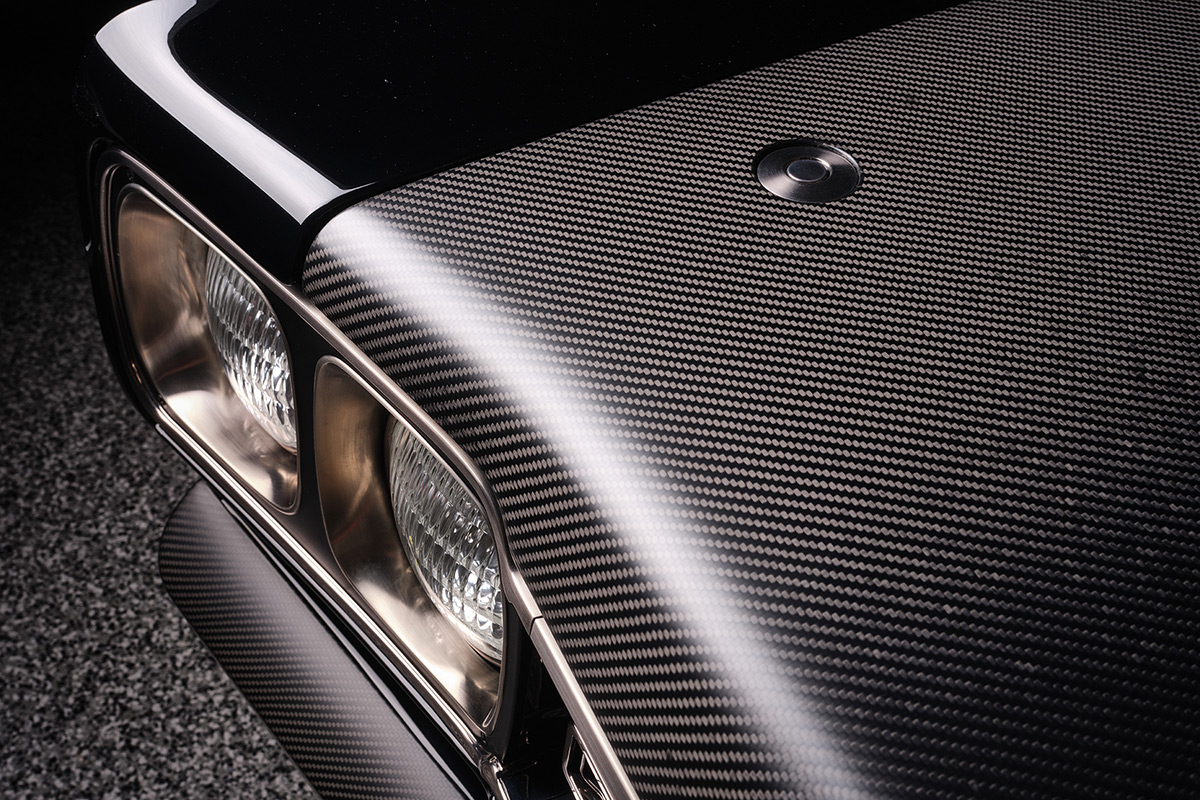 Billet taillight surrounds accommodate LED halos for turn and brake light functions. Each corner is hinged, giving access to the fuel filler on the driver’s side and battery disconnect on the other.

The door handles were also inspired by the originals and machined from billet. Sean was able to slim the profile, remove the lock, and carve a pocket into the leading edge like a chef’s knife, improving its ergonomics.

The final exterior embellishment was a set of three-piece billet hub caps that conceal HRE wheels. The hub caps pay tribute to the ’69 Roadrunner’s original “dog dish” caps but introduce far more detail, texture and solidity. You won’t see these caps fly off when Kevin takes a tight turn!

Billet elements were incorporated inside the car as well, with door handles added to the exquisite door cards, and the Roadrunner steering wheel given a thorough makeover. The wheel is intended to give Kevin more connection to the car as he grabs the billet gear shifter, which resembles a slasher movie knife. As before, all billet parts received a brushed nickel finish with strategically placed Halloween orange highlights as needed. 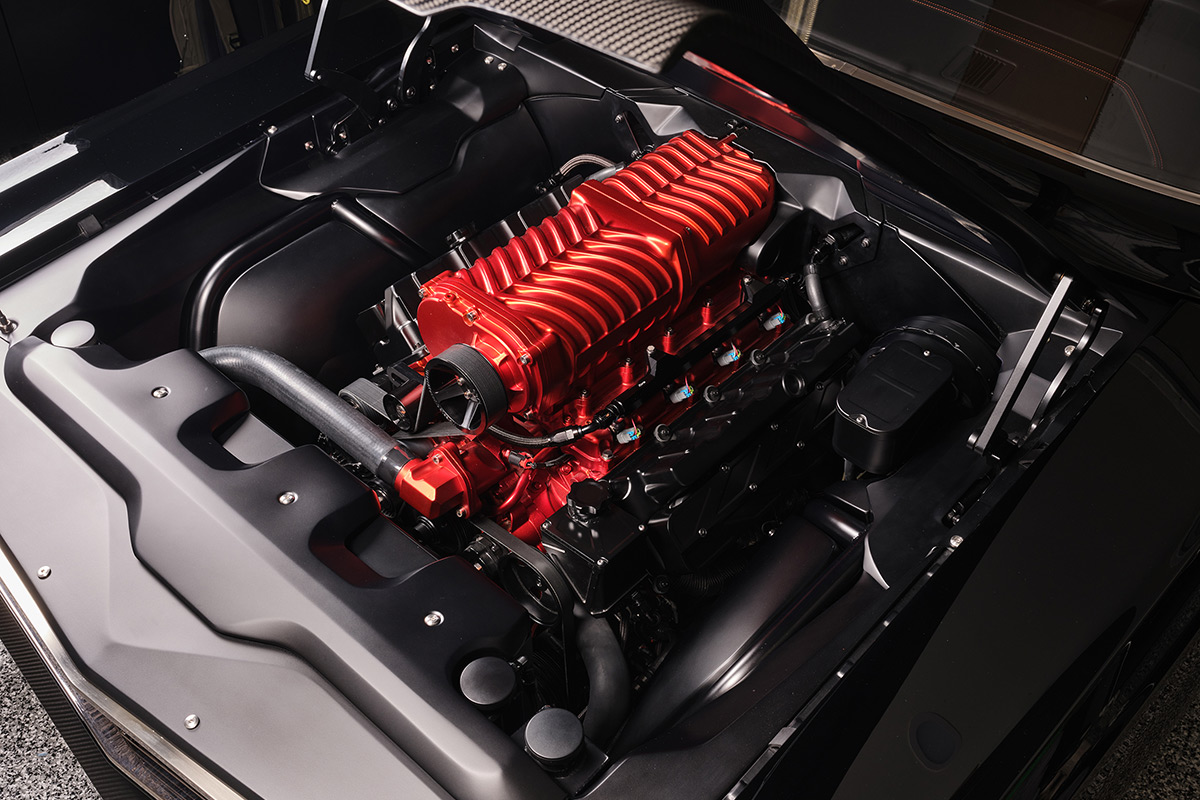 Built by Mario Abascal at Gearhead Fabrication, Salvaggio describes the 426ci Hemi as a hybrid Demon / Hellephant motor that was designed to run on California 91-octane fuel. It develops a phenomenal, dyno-proven 940hp.

The monstrous engine rests in a handcrafted bay designed to expose the roll cage and highlight some of the mechanical aspects. It creates an industrial look that conceals the induction system and throttle body, allowing the custom supercharger to take center stage.

The Hemi valve covers were redesigned to echo the industrial theme, while a power steering reservoir was machined to replace the stock plastic part.

To cool the Hemi in LA traffic, Salvaggio fitted a Power Cool radiator with SPAL fans, and to cool Kevin there’s air conditioning by Vintage Air.

At Kevin’s request, the Hemi is regulated by a Tremec 6-speed manual transmission, which was strengthened for this application. John’s Industries fabricated the rear axle assembly using a 9” center section and 3.70 gear ratio. The axle is a favorite of Dave Salvaggio because they’ve always proven exceptionally strong, and every axle is dyno tested to ensure quiet running.

As we mentioned, the DSE Gen-X 595 front suspension was an integral piece of the chassis design. It was grafted into the Salvaggio frame rails to create a full frame body. Fitted with JRI shocks front and rear, the suspension system will provide both the comfort and handling Kevin requires. 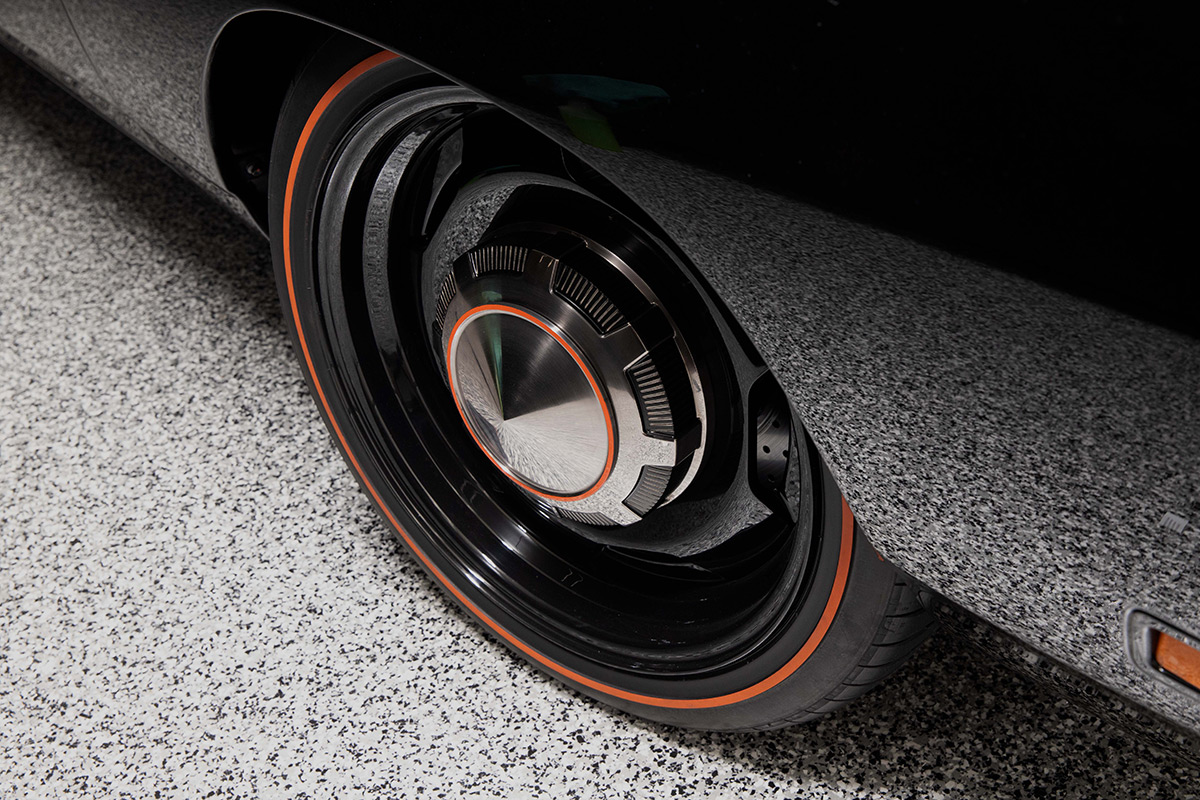 The brakes are the latest equipment from Brembo, utilizing lightweight six-piston calipers at the front and large 14” rotors, while the rear has four-piston calipers and 13” rotors to get the job done.

The high-spec braking equipment is somewhat hidden behind the black HRE wheels. Manufactured in lightweight aluminum, the 18×10” front and 20×12” rears are designed to resemble traditional steel rims to retain the classic appearance when fitted with the billet hub caps.

The wheels are wrapped in high-performance Michelin rubber, measuring a healthy 345/30 R20 in the rear to provide ample grip. And for this project even the tires were customized, Diamond Back Classic Radial adding an orange stripe to reinforce the Halloween accent. 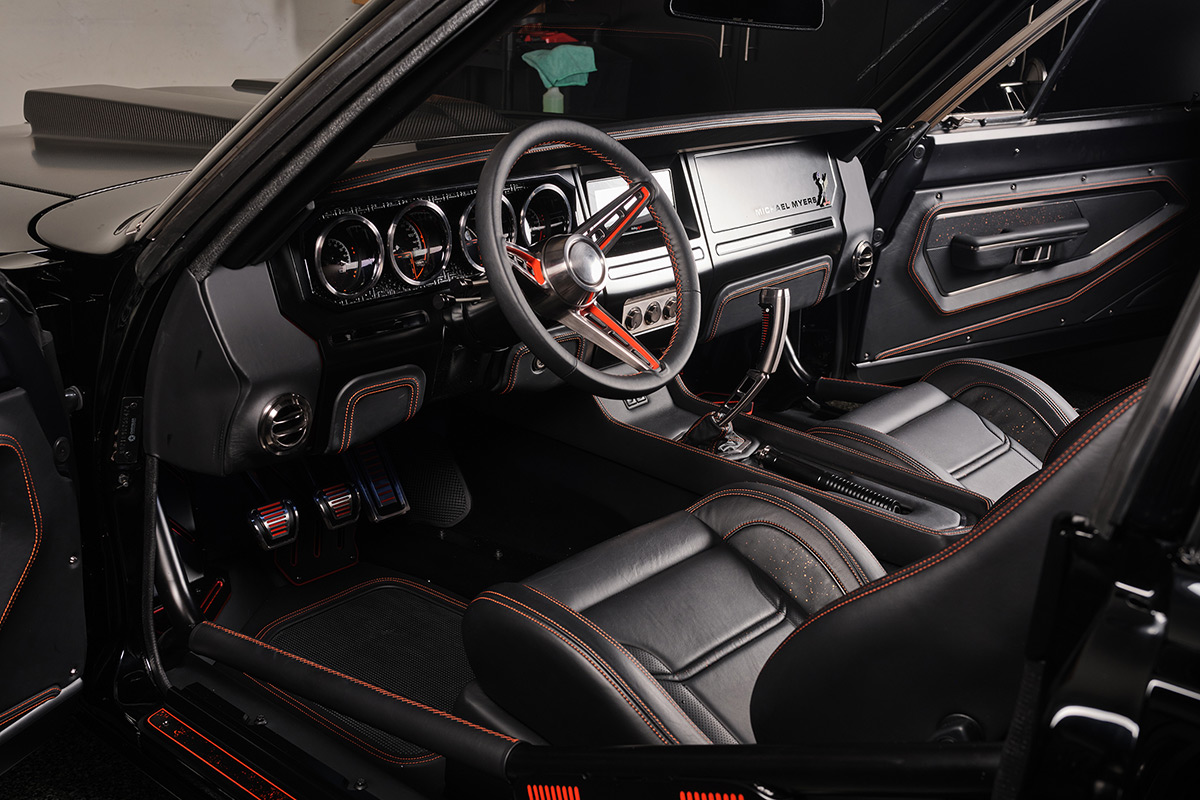 As one of the premier upholstery shops in the country, Salvaggio has worked with Gabe’s Custom Interiors for many years and the Roadrunner would be no different. Gabe’s team used black Italian leather throughout, including perforated sections. They also went the extra mile by creating a unique orange Halloween splatter effect. It was achieved by sending color samples of the engine paint and tire stripe to Italy, where it was applied to several hides. 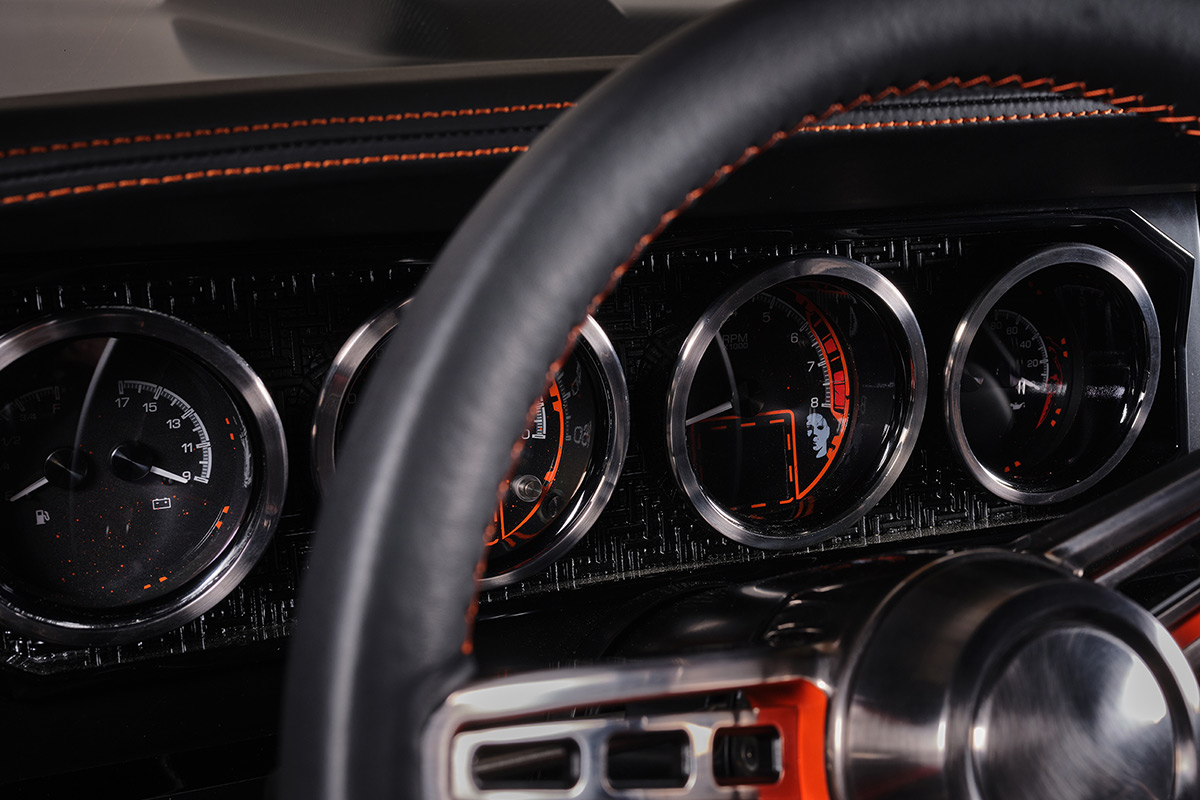 The result is a combination of black, perforated and splattered leather used to upholster the Recaro front seats, custom rear seats, headliner and door panels. All stitched with contrasting orange thread. Above the glove compartment are the words “Michael Myers,” the Halloween-inspired name of Hart’s new hot rod. The gauges were also airbrushed by Randy Russell with easter eggs that hint at the slasher name Kevin gave his Roadrunner, which also crops up elsewhere around the car.

The trunk is far from conventional, repeating the industrial architecture of the engine bay, exposing parts of the roll cage and wheel tubs, and finished with leather panels matching the interior.

As mentioned, Kevin has a custom billet steering wheel and shifter, but we should also mention the billet instrument cluster. It houses Dakota digital gauges that plug into the CANbus system and communicate with the Holley Dominator engine management system. 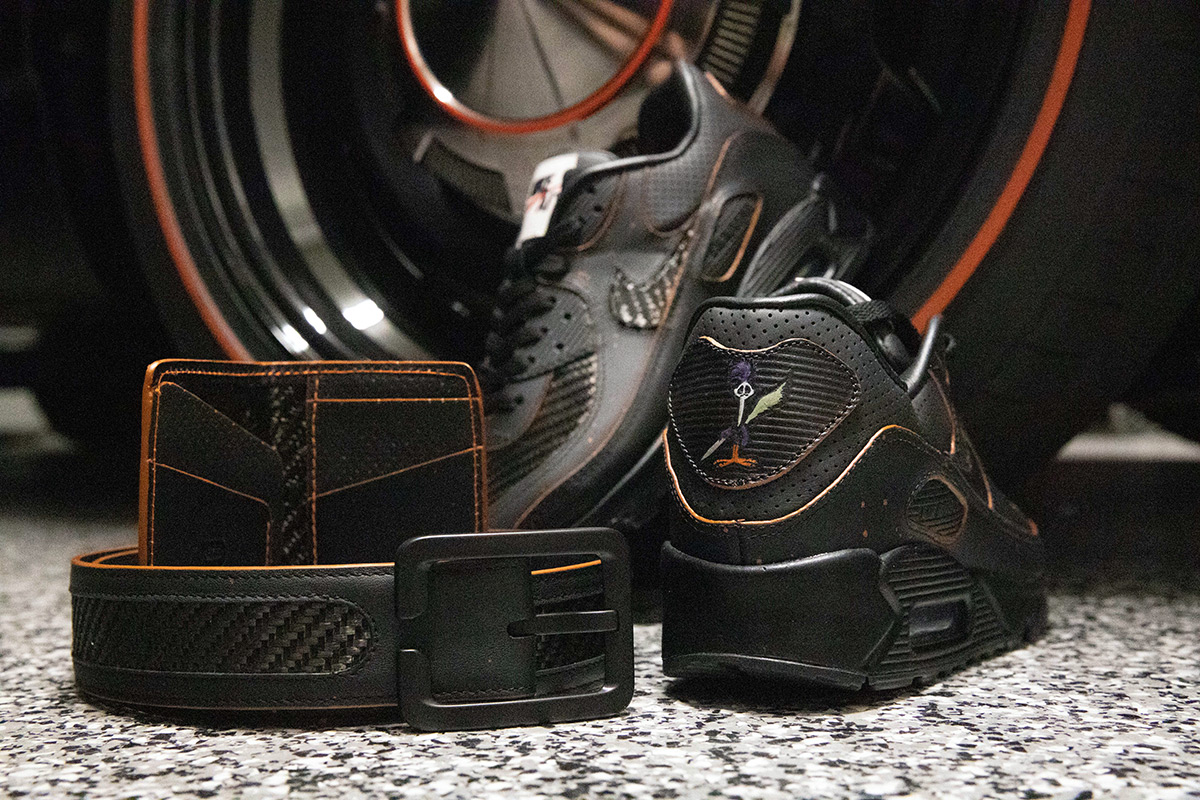 With pieces of splatter leather remaining, Salvaggio Design enlisted Rey Marquez at Reymar Footwear to create a pair of custom Nike shoes, belt and wallet, allowing Kevin to match the car whenever he drives it.

As a shoe specialist, Reymar bought and dismantled a pair of Nike Air Max 90 sneakers and reconstructed them using the orange splatter leather, which itself had been inspired by the splatter effect on early Air Max sneakers. He also took strips of genuine carbon fiber used to build the car and stitched them into the shoes, finally adding aluminum Roadrunner badges created for the Plymouth. 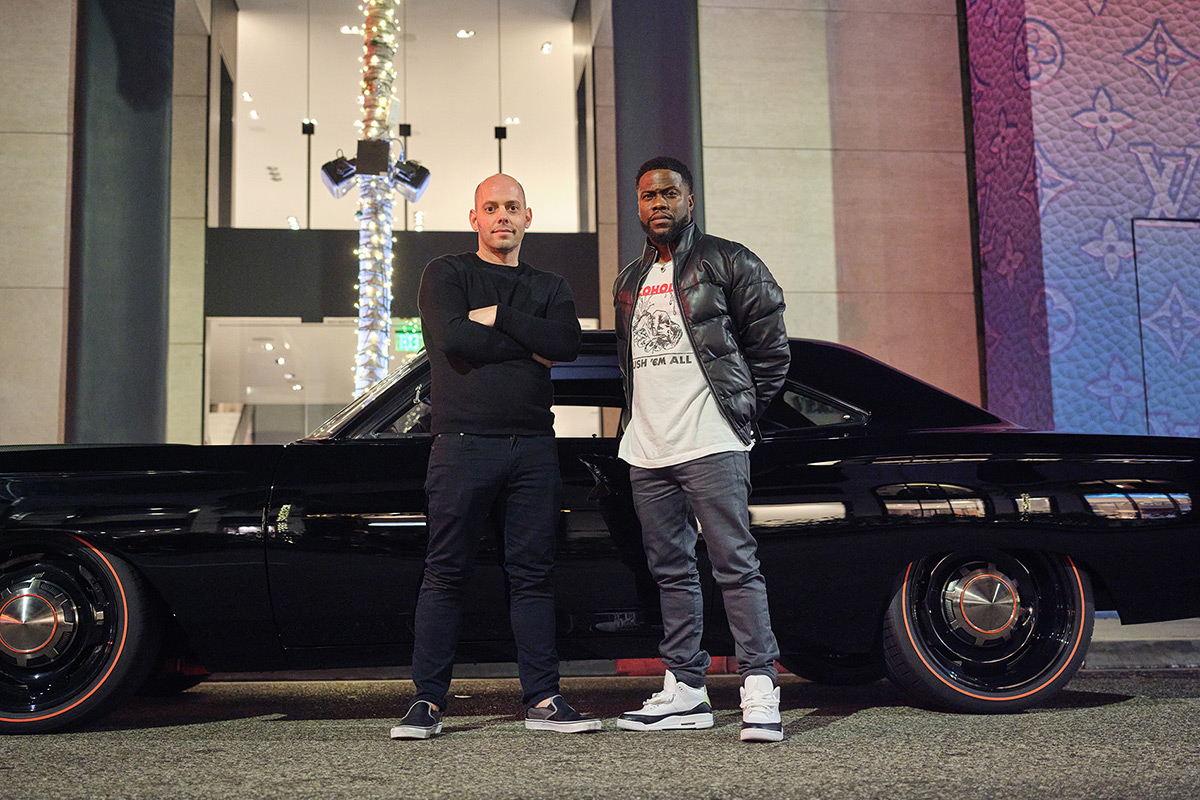 Kevin was overjoyed with his 1969 Plymouth Roadrunner by Salvaggio Design, with the entire project taking only ten months to complete. It’s a pretty killer ride (get it?), and we wish Kevin many miles of driving enjoyment with this beauty!

You can watch a little teaser video of the 1969 “Michael Myers” Roadrunner below. If you want even more, you can watch a 10-minute build video here.