Ford Is Using Simulators To Speed Up Development For New Vehicles 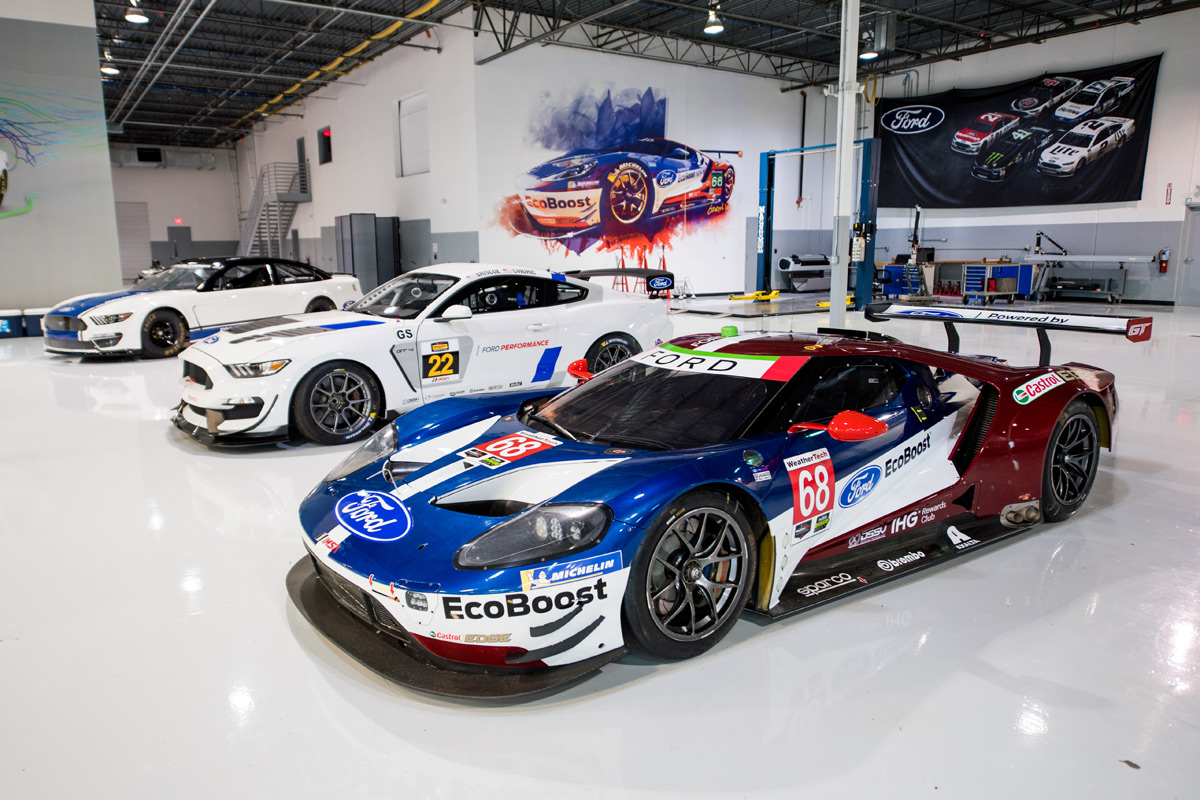 Ford recently invited us down to their Ford Performance Technical Center, located in the heart of NASCAR country in North Carolina. The purpose? To see firsthand how they are able to use the same research and development technology for their racecars to speed up development of consumer vehicles, while reducing engineering costs in the process.

Walking into the 33,000-square-foot facility, you’re immediately drawn to the various racecars (NASCAR, rally, road racing, etc) on display. But the real magic happens in the two simulator rooms, which feature a 26-foot wraparound screen and a “buck” (a cockpit that recreates the interior of various cars) in the center of the room. When the sim goes live, the room goes dark, and the driver and engineers are able to fine-tune cars based on their experience on the track. 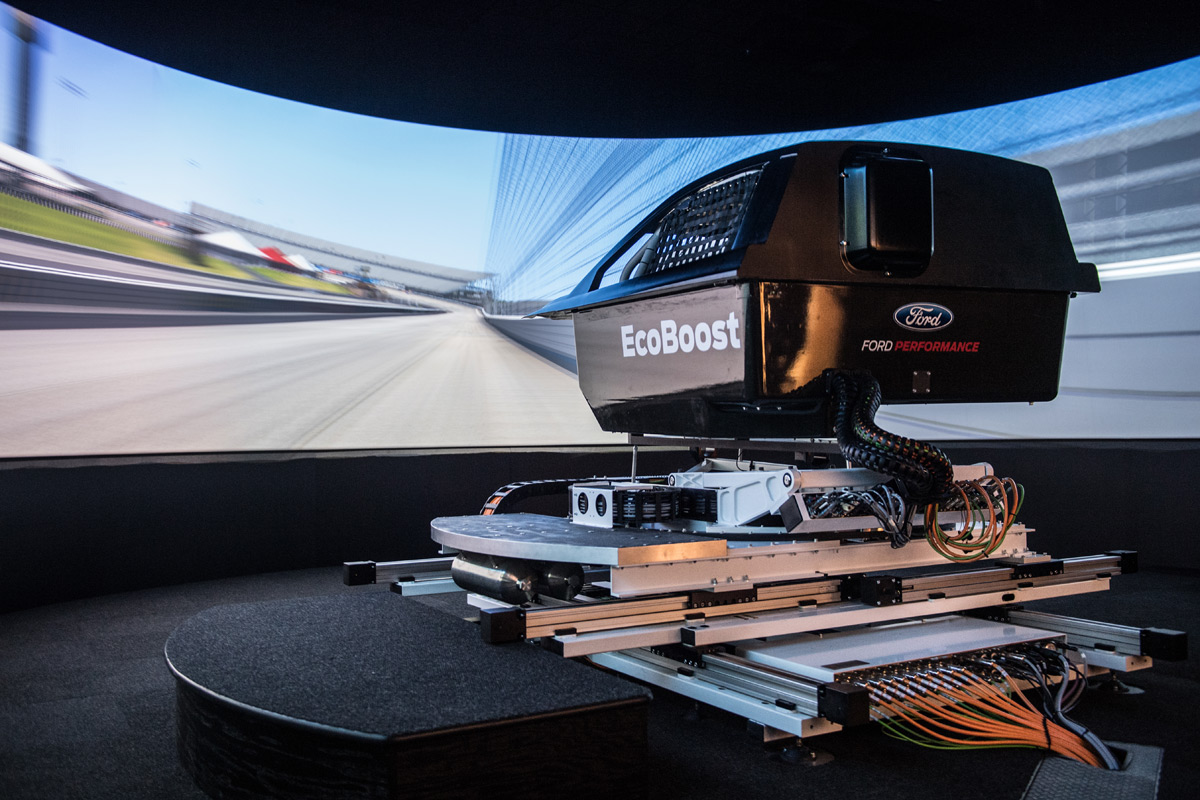 On the day we’re visiting, NASCAR’s David Ragan was getting ready for the Charlotte race by taking a few virtual laps around the infamous “Roval” configuration, after which he stopped and relayed some feedback to engineers, who made the necessary changes to his car before sending him back onto the track. Once he finds the optimum setup, his team will be able to make those changes on his actual race car for the upcoming weekend.

Later on, we saw him crash into the tire wall. “Maybe the other set-up was better,” he told the control room. But that illustrates what a valuable tool the simulator is, as had this happened on the actual track during their practice, he would have been likely down for the count, with the car damaged and unable to race. 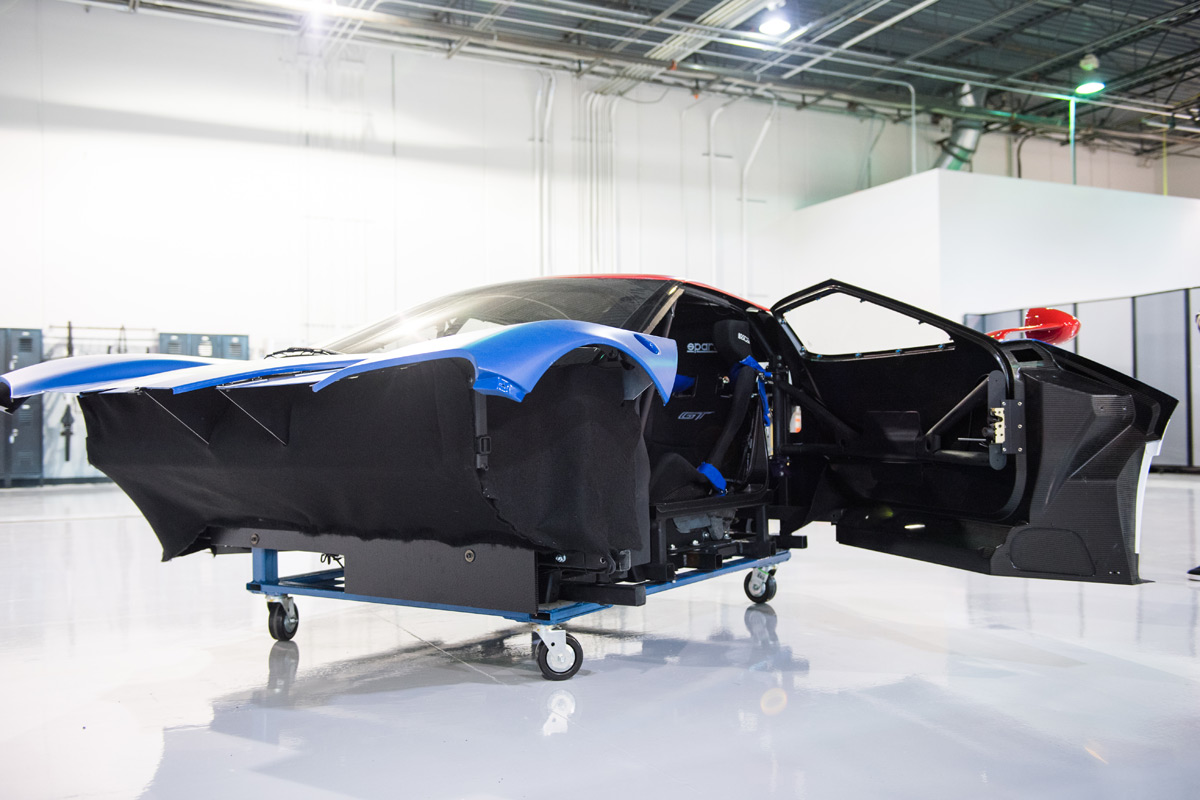 But this technology isn’t just for racecars. There’s a second simulator here that is used to test pre-production vehicles. In fact, when the Ford GT was being developed, it was put through hundreds of hours of virtual testing before ever rolling onto actual pavement. Imagine being able to drive Nürburgring as much as you want, fine-tuning the car along the way to get the best possible performance, but without the expense of shipping a car, parts, and teams of people over there, not to mention the actual track time.

We had a chance to “drive” one of the simulators, taking out a Mustang GT350 for a spin on one of Ford’s test tracks (which I actually drove for real years ago). Hopping into the buck, I was greeted by the familiar Mustang cockpit, complete with a working gauge cluster, steering wheel, and 6-speed shifter, and all three pedals. I eased onto the track, got my bearings, and then drove the course as if I were in a real car. 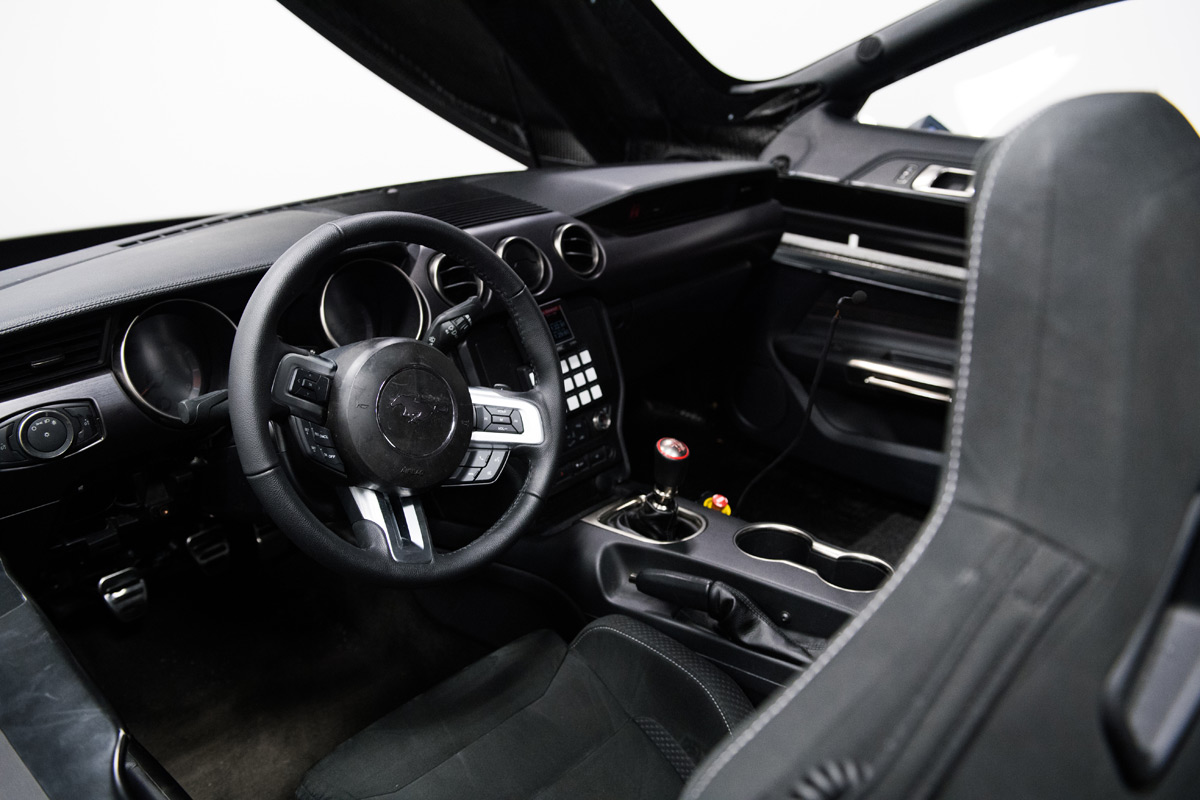 My only complaint is that the sensation of speed still isn’t completely there, but otherwise the experience was pretty spot on, and the car behaved exactly like the real thing. In fact, I gave the car a little too much gas going into the corner, and the back end got away from me, with the car going airborne and crashing, a cloud of smoke coming from my virtual hood. Glad this was a simulation and not a multi-million dollar prototype that I was driving!

Speaking with one of the engineers there, I learned that he had logged hundreds of hours with the upcoming Mustang GT500.. on the simulator. He’s been able to test out various aero kits, a far quicker and cheaper process than building and swapping them out physically. Eventually, these changes will be tested in the real world, but the simulator is pretty spot on. Comparing the simulator lap times to real on-track times – “Our lap times at Virginia International Raceway, where we go quite often, are quite comparable.” ‘Nuff said. 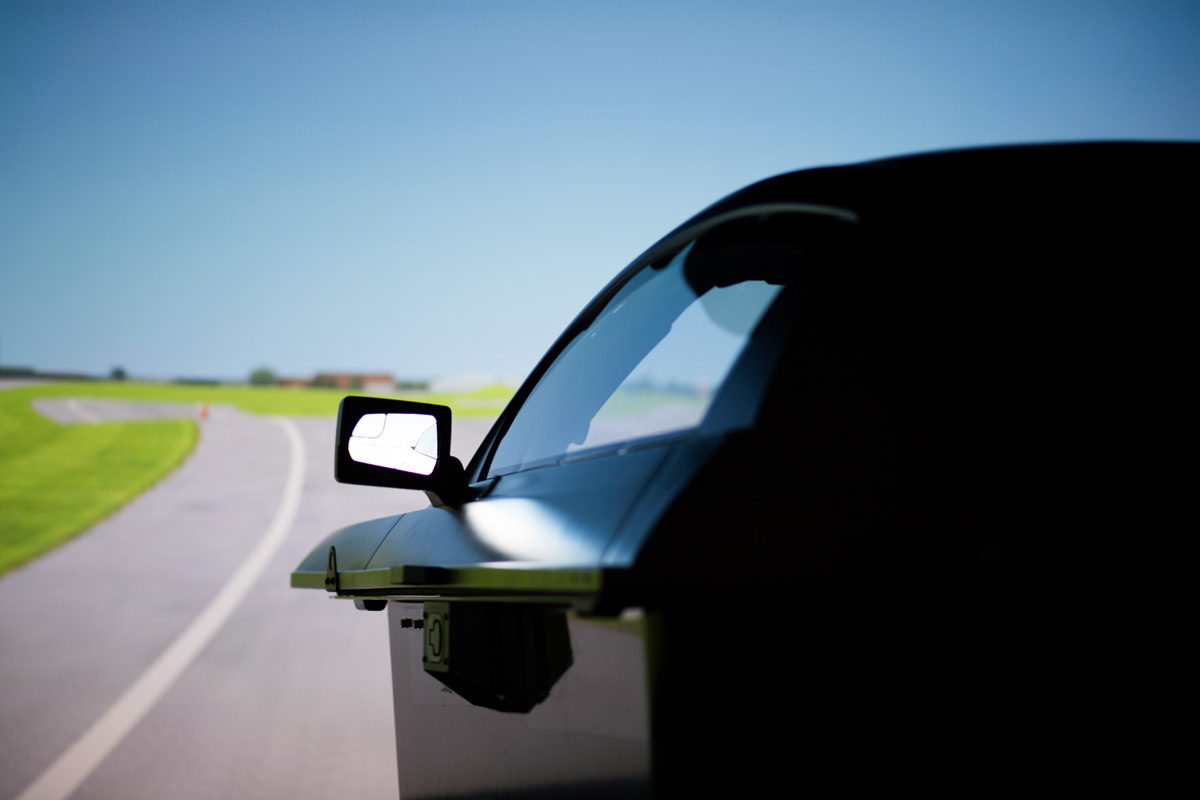 Now lest you think this only applies to sports cars and the likes, the simulator can be also used for something as mainstream as the Ford Edge, Fusion or F-150. Again, the goal here is saving time and reducing engineering costs.

Along with the simulator, Ford is using several other advanced tools to help speed production development times and cut costs. These include a new dynamic simulator, computational fluid dynamics for aerodynamic testing and virtual manufacturing. Together, these tools are migrating from the super-high-tech, low-volume racing development world to Ford’s global product development system. 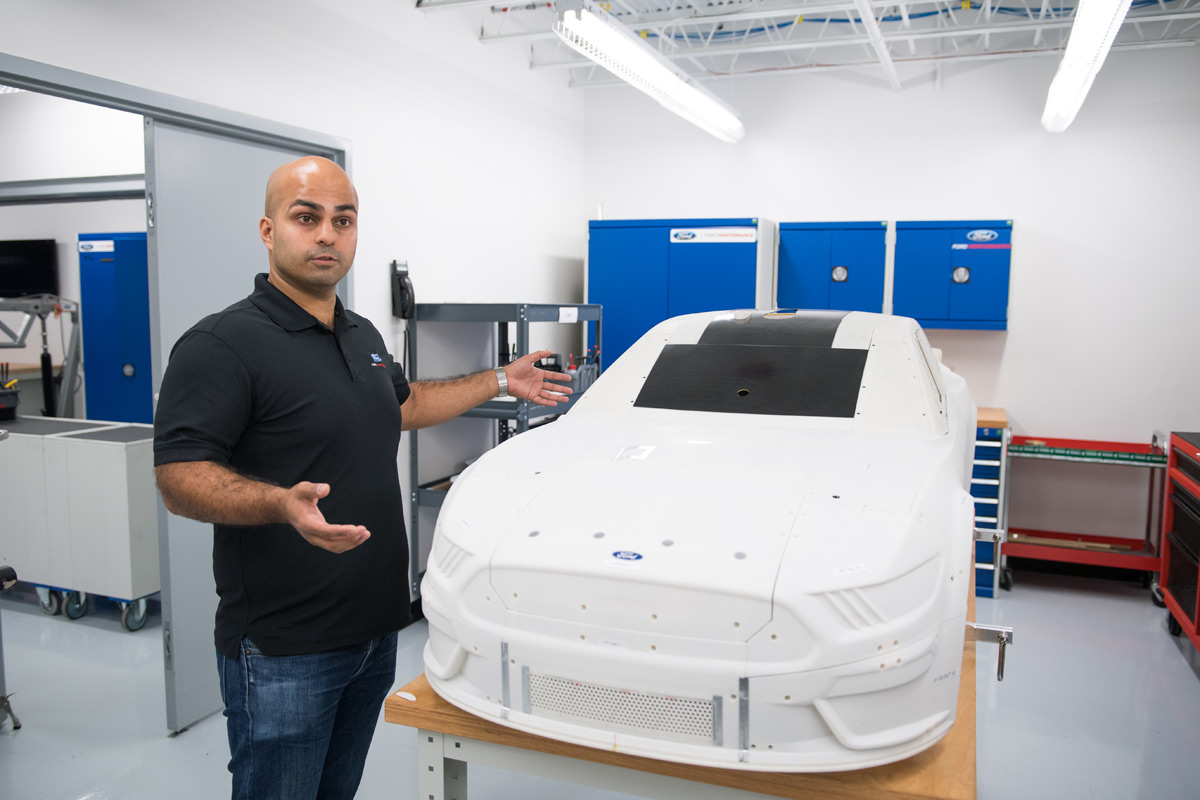 It’s really amazing to see how we have come from the old days of clay modeling to renderings on computers, and now to simulators and such that are speeding up the process even more so. In fact, the 2019 Ford Mustang NHRA Funny Car program will have no prototype tested before the racing body is built, a testament to the team’s confidence in its abilities.

Thanks to Ford for giving us a peek behind the curtains, and to see how the company is using the knowledge they’ve gained from racing to make their mainstream vehicles better.

The 2018 Subaru BRZ tS Dials Things Up A Notch With Some STI Goodies
Battle Of The Golfs: 2018 GTI vs R